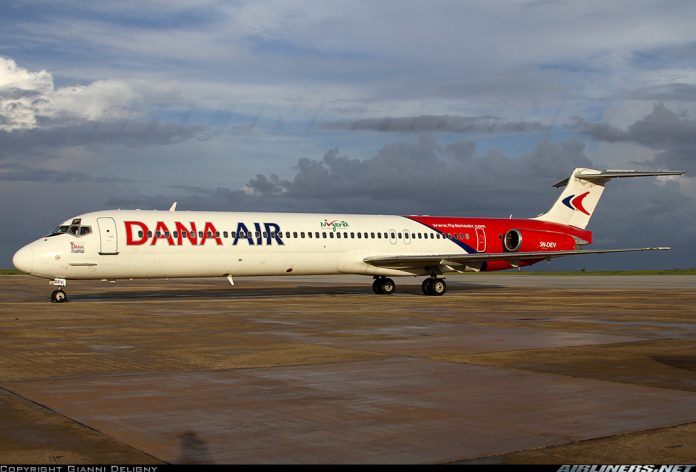 The chief operating officer of Dana Air, Mr. Obi Mbanuzuo has called on the federal government to make the right policies for the survival of domestic carriers.
Speaking in an interview in Lagos, Mbanuzuo described the airline business as “capital intensive” saying everything is priced in dollars.
He said aviation fuel, for instance, takes over 40 per cent of an airline’s revenue.
“There is the need to refine jet fuel locally. Currently, a lot of the supplies are imported. There are import problems, which are causing scarcity.
“If we can refine locally, there will be excess supply to satisfy growing demand. Secondly, government should make that zero per cent on import work so that when something lands from Abuja, Kano or the seaports, the airline should have their parts in less than five hours.
“So, we need government support in the sense of making the right policies. Recently, Ghana reduced the price of aviation fuel by 20 per cent but government here says it is deregulated, but the currency is dropping every day. We should be looking at the Nigerian economy,” he said.
He also said the policies on maintenance should be such that airlines could get spare parts and equipment, in and out of the country.
He said nothing should stop an airline from taking a land in Lagos and building a hangar.
“If maintenance were done in Nigeria, we would not waste money abroad. But because the policies do not work, it is not viable,” he said.
Mbanuzuo also said getting foreign exchange to run an airline had been difficult.
“We require it to do business and it has become very difficult to come by. We import everything we use, from the spare parts to jet fuel, which is not refined locally. Even in the good times, all these were imported, but the cushioning effect in the past is that, at least, the local currency, which we traded, was a bit stable, but of recent, naira has collapsed. So, what we pay for both spare parts and maintenance has gone up and this affects what customers pay as well,” he said.
Mbanuzuo who said aviation has the potential to contribute at least four or five per cent to the country’s gross domestic product also commented on the charges airlines pay saying “I believe that the five per cent of what we pay as charges should be completely done away with because we pay the regulators for everything that we do.”
“We pay for aircraft registration, pilot licences, approval of manuals and approval of simulators, amongst others. There is a contentious issue of five per cent on tickets sales.
“The Nigerian Civil Aviation Authority (NCAA) says it is from the five per cent on ticket sales it finances itself. I am a supporter of the independence of the regulators and advance economy supports that regulators should be independent of government so that they do their job properly. They have to fund themselves somehow. Any service that the airlines need from regulators, they pay for it.
“If we want to get a pilot’s licence approved, we pay for it and that is how it is done in other countries. You pay for certain services. Apart from these charges, five per cent on ticket sales is also being deducted in Nigeria.
“The five per cent does not exist anywhere else. The five per cent is hard work of the airline. If I do my customers service properly, do my marketing right and do my staff training, amongst others and I charge my passengers, it is my hard work, not the regulator’s,” he added.
“They have a second charge called the terminal navigation charge, for using the radars. So, why impose double taxes? What is the need for the double taxation? In foreign countries, aircraft manufacturers can manufacture aircraft with a particular maximum take-off weight,” said Mbanuzuo.

‘I want to be a party delegate’

Why we prioritise provision of airport infrastructure – Buhari