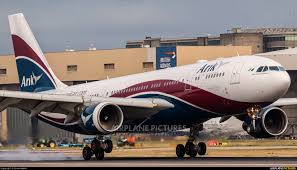 Arik Air which suspended operations temporarily for more than 24 hours has announced resumption of services across its routes.

The public relations and communications manager of the airline, Mr. Adebanji Ola who stated this in a press statement issued today in Lagos also said the airline had no issues with aviation fuel suppliers as insinuated.

He advised the airline’s customers to “discountenance the disparaging allegations, unsubstantiated and uninformed claims about the airline’s inability to meet its financial obligations to aviation fuel marketers and a purported withdrawal of insurance services to Arik Air by its insurers.”

“While the current scarcity of aviation fuel (JET A1) has impacted on the operations of airlines in the country, Arik Air is in good standing with its fuel suppliers and has been meeting its obligations to them and to our insurers.

“With the regularization of the required documents relating to the renewal of the insurance, Arik Air will be resuming its normal flying schedule from 1100 hours on Wednesday, September 14, 2016.

“Arik Air regrets the unfortunate inconvenience caused to its customers and reassures our customers of expedient rebooking of any affected flights,” he said.

It would be recalled that the airline’s group chief executive officer, Dr. Michael Arumemi-Ikhide announced on Tuesday that Arik halted services to enable it sort out insurance issues with the National Insurance Commission (NAICOM).

He said the action was taken “pending approval of aircraft documentation related to insurance renewal.”

He assured that the airline was working round the clock to resolve the necessary documentations which, he said had been a challenge due to the long holiday.

Transcorp is positioned to light up Nigeria significantly—Elumelu

Why US has highest COVID-19 death toll – Experts