Dana Air has partnered the Imo State government to launch Imo Air which will be managed by Dana Air.

Speaking during the launch of Imo Air at Sam Mbakwe Airport, Owerri, the governor of Imo State, Mr. Rochas Okorocha said the collaboration with Dana would last for 10 years.

“This is a 10-year partnership between Dana Air and the Imo State government and it is borne out of our desire to increase business activities in Imo state, improve tourism drive, diversify the economy of Imo state, and provide employment opportunities for Imolites,” he said.

He added: “We have no air operator certificate; that is why we approached one of the leading airlines in Nigeria to manage this service for us. We believe that our partnership with Dana Air to operate Imo Air is a step in the right direction to open Imo State to the world.

’Also in the offing is the Imo International Cargo Airport which targets to open the Southeast up to importers and exporters of all kinds of commodities, thereby reducing the over -reliance on Lagos, Kano and other international airports for the export and import of goods into the country. This initiative is no doubt a boost for the Southeast economic liberation struggle.” 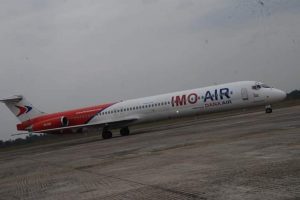 Also speaking at the event, the accountable manager of Dana Air, Mr. Obi Mbanuzuo expressed delight at the partnership saying “we have no doubts that Imo Air is in safe hands, as the choice of Dana Air to operate Imo Air.

Obi who described the partnership as “an excellent and well thought-out decision by the proactive governor of Imo State added: As you may be aware, Dana Air is the only domestic airline to have undergone an operational audit, conducted by the Nigerian Civil Aviation Authority (NCAA) and its foreign partners- The Flight Safety Group.

“Also, in our determination to meet the highest global aviation safety standards, Dana Air recently concluded its International Air Transport Association (IATA) Operational Safety Audit (IOSA) with a strong desire to move on to the next stage soon.”

Speaking further, Obi said: Our continuous investment in human capital development, training and retraining of staff to meet the challenges of the industry has culminated in a dedicated, loyal, meticulous, pragmatic and highly motivated workforce.

“This has also been the secret of our consistency and steady growth in the industry despite the multiplying operational challenges that domestic airlines have to grapple with.

“In terms of service, Governor Okorocha didn’t make any mistake as our in- flight service is world-class and our on-time performance is second to none. We are the only domestic airline with a help desk/ call centre that works almost 24/7 days a week, solving guest’s issues and making them smile at every opportunity”