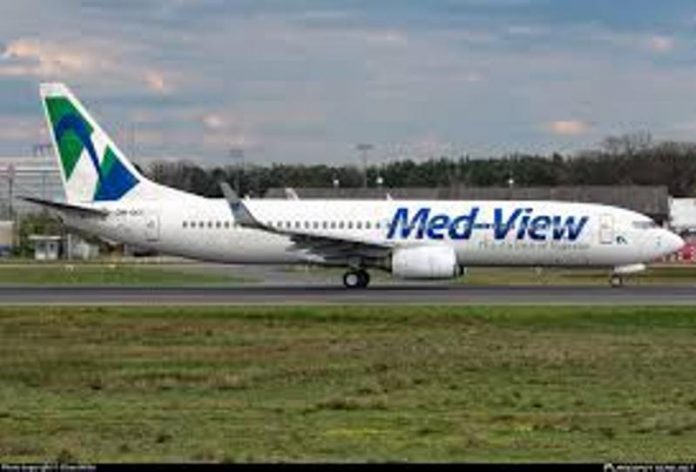 Coming on the heels of the defunct Aviation Development Company (ADC) and Albarka Air, Med-View Airline is set to list its shares on the Nigerian Stock Exchange (NSE) by way of ‘listed by introduction.’

The airline’s executive director, business development, Mr. Isiaq Na-Allah said the official listing which comes up on January 31, 2017 would make Med-View Airline the first carrier “to list its shares on the local bourse in the last decade.”

He said the growth projection and market forecast informed carrier’s decision to be listed on the NSE to give members of the public the opportunity to be part of the airline through share holding.

Besides, Na’Allah said the listing will enable the airline expand its routes network and acquire more aircraft to boost operations.

He said the airline, which began as a cargo, tour and charter operator 12 years back also ventured into airlift of pilgrims and “revolutionized pilgrims handling and airlift in Nigeria and the West African sub-region.

“Today, Med-View is the benchmark and the airline of choice when it comes to Hajj operations in Nigeria.  It is ranked number one by the National Hajj Commission of Nigeria (NAHCON) for hitch-free Hajj operations.

“Buoyed by the success of Med-View Travel and Tours, Hajj operations, and charter flights, Na’Allah said the airline upped the ante by assembling a team of hard core and tested professionals and went into scheduled operations in 2012 starting with domestic routes.

“Just within four years, the airline has become a household name in the aviation industry.  Within this short period, the airline has eight destinations – Lagos, Abuja, Port Harcourt, Kaduna, Yola, Enugu,Owerri  and Maiduguri on its domestic network, and had flown over two million passengers.

“To its credit, Med-View Airline has recorded a steady growth of 20 per cent in turnover. This gave it the confidence to go international, and now operates flights to London, Jeddah, Accra, Monrovia and Freetown.

“The airline has secured all necessary approvals to link all the countries in the Economic Community of West African States (ECOWAS) in the next few months,” he said.

Na’Allah also stated: “Also on the front burner is expansion on the international routes to United States via Baltimore, United Arab Emirates via Dubai with connections to Europe and the Far East through a code share airline partner.”

Meanwhile, Na’Allah said Kedari Capital Limited and Trustyields Securities Limited are the financial advisers/issuing house and stockbrokers to Med-View Airline in respect of the Listing exercise

With the listing of Med-View Airline, the number of airlines that have ever been listed on the NSE increases to three. In 1994, ADC was the first carrier to be listed on the NSE, while Albarka Airline was listed in 2002 but delisted in 2011. Two other aviation-related companies are listed on the NSE. They are Airlines Services and Logistics, an in-flight catering company and the Nigerian Aviation Handling Company (NAHCO), a ground-handling company.

ICYMI: Forget the pretence, APC will swim and sink on Tinubu (I)

No matter what, tomorrow never dies