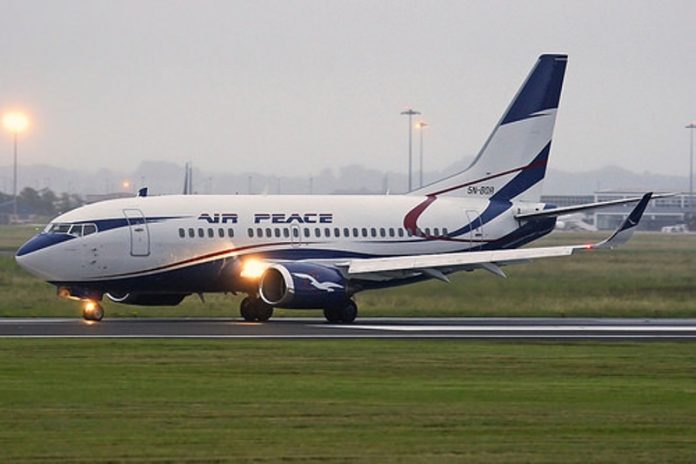 There was panic today at the domestic wing of the Murtala Muhammed Airport, Lagos when a B737 aircraft belonging to Air Peace had burst tyres during take-off rolls.

News Gazette gathered that the Abuja-bound aircraft marked 4P7198 had three of its tyres burst.

It was further gathered that the aircraft which had 114 passengers and crew on board was leaving for Abuja around 10.40 am when the incident occurred.

A source told News Gazette that all the passengers were disembarked adding that the airline’s management was making plans to make an alternative arrangement to fly the passengers to Abuja.

But in a statement issued by the spokesman of the airline, Mr. Chris Iwarah, Air Peace said the flight was aborted when the pilot-in-command suspected that there was an issue with one of the tyres.

“Although it was initially suspected to be a case of burst tyre, our engineering department later inspected the aircraft and confirmed that one of the tyres got deflated.

“Passengers on board were transferred to another aircraft to ensure they did not miss their appointments.

“The passengers were all calm, as it was not a life-threatening incident. There was no question of air return as our very experienced flight crew noticed the development much before takeoff. Because of the premium we place on safety, our pilots are under a duty to call for checks when they suspect any fault however basic it may be.”

“We wish to assure our loyal customers, air travellers and the general public that we will continue to accord their comfort and safety top priority as we have maintained since commencement of our flight operations,” he added.

NCAA: “No carrier operates without insurance cover, other certificates”