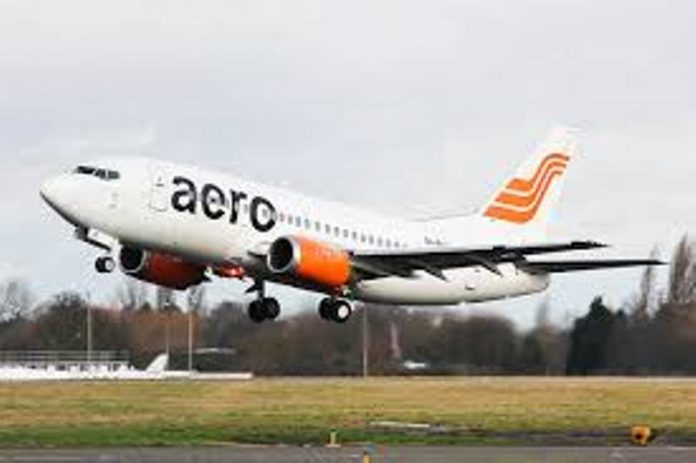 A tragedy of monumental dimension was averted on Tuesday as 52 adults and one infant aboard a Port Harcourt-Lagos Aero Contractors aircraft narrowly escaped suffocation mid-air when a thick smoke filled the cabin of the flight marked NG316.

It was gathered that mid-way into the flight, the cabin of the aircraft was filled with thick smoke thereby making passengers to scream loudly.

It was also learnt that a panic-stricken passenger ran into the toilet following which the lavatory smoke detector alarm came on and caused more panic in the cabin.

It was learnt that the aircraft started having trouble 20 minutes after take-off but the passengers endured as the pilot assured them that there was nothing to be afraid of.

In a statement issued in Lagos, the media consultant to Aero, Mr. Simon Tumba of SY&T Communications confirmed the incident saying the smoke came from the baggage compartment.

“Preliminary reports have it that at 1645 GMT about 75NM to Lagos at 24,00 feet, the cabin crew observed that the cabin was misty. This was reported to the Captain, who briefed the passengers accordingly assuring them of a safe landing in Lagos in a couple of minutes.

“Expectedly as announced by the pilot, normal descent was initiated into Lagos.  While descending however, the cabin crew again reported this incident to the Captain and by this time the smoke was getting denser in the cabin.

“Ready and armed with “Aft Cargo Smoke” indication in the flight deck, the crew carried out the smoke dispersal procedures and contacted air traffic control at 1655GMT, requesting for emergency support services and proceeded to Lagos, which is the airport with the full complement of emergency support.

“The Captain also announced to the passengers to be calm as the smoke in question did not present any irritation or discomfort. The aircraft landed at 1703 GMT without any incident.

Tumba said the chief executive officer of the airline, Capt. Ado Sanusi, “has ordered for full scale investigation into the incident.”

He added: “Although the company engineers had carried out the routine systems checks, and reported all normal, Capt. Sanusi who has also reported the incident to the appropriate authorities in the country said another round of thorough investigation was ongoing.

“But the management of Aero said it regrets any inconveniences the incident might have caused its esteemed passengers and assured it will get to the root cause of the matter,” said SY&T.

An old management staff who craved anonymity told News Gazette that an engine of a Bombardier marked 5N-BKV was removed and fixed on aero aircraft.

It was further learnt that it was the second engine of the aircraft that was removed in a lease agreement in which Aero would be paying Arik a paltry $25,000 a month until the engine was returned to Arik.

Atiku will sell everything, Obi will starve people to death – Tinubu