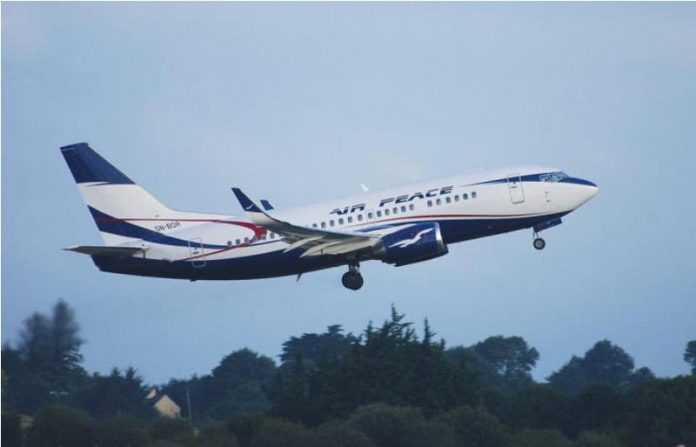 Aviation security personnel of the Federal Airports Authority of Nigeria (FAAN) had on Monday arrested three Air Peace passengers, two men and a woman for disrupting a Lagos-Abuja flight for three hours.

A spokesman for Air Peace, Mr. Chris Iwarah said in a press statement that AVSEC personnel were called in after efforts to get the passengers to back down on their unruly conduct failed.

He said the three passengers had queried the sitting arrangement during the pre-departure safety briefing by the crew adding that all entreaties to make them (passengers) understand that the arrangement was in order fell on deaf ears.

“We wish to confirm and set the record straight on the unruly and disruptive conduct of three passengers (two men and a lady) on our 18:30 Lagos-Abuja service on Monday, September 11, 2017.

“The pilot-in-command of the flight was later briefed by the crew to intervene. Again, the passengers refused to cooperate with the captain. They insisted on bringing our engineers on board to confirm the airworthiness of the aircraft.

“The three passengers were eventually taken in for interrogation by FAAN security personnel, who later transferred them to the police for further investigation.

“We confirm that the aircraft’s seating arrangement is as approved by both domestic and international aviation authorities, including NCAA and FAA, an in compliance with global best practices in the aviation industry.

“While we will continue to treat all our valued guests with the greatest respect and courtesy, we will never allow a tiny minority of customers jeopardise the safety and comfort of our customers and the overall safe operation of our flights.

Lagos flags off airlift of pilgrims to Israel, Rome

PTF pushes reopening of schools, worship centres, others to states

NCAA bans use of Samsung Galaxy Note 7 devices on flights

Dana Air introduces ”Cash Back” reward on each booking

Suspension of national carrier project is a bold step—AON