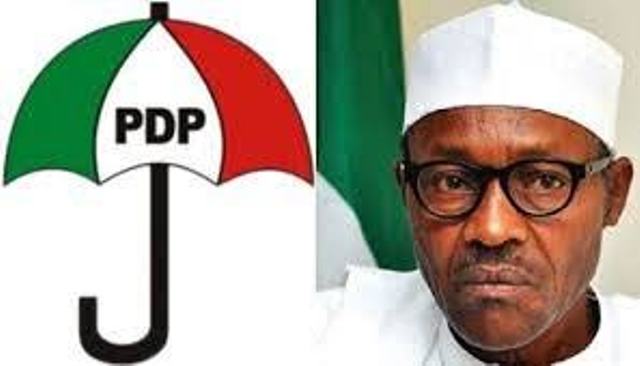 The Peoples Democratic Party has criticized President Muhammadu Buhari’s request for a foreign loan of $5.5 billion saying such borrowing will further mortgage the future of unborn generation of Nigerians.

The president had, on Tuesday, asked the National Assembly to approve two external loans worth $5.5 billion.

While the terms and conditions for such facilities were not made known, the president, in a letter read by Senate President, Bukola Saraki, during a plenary session stated that the first loan of $2.5 billion is for the financing of the deficit and capital projects in the 2017 budget while the second loan of $3.0 billion is for the refinancing of maturing domestic debt obligations through the issuance of Eurobonds or a loan syndication.

But the PDP in a statement issued today in Abuja by its spokesman, Prince Dayo Adeyeye said condemned the external borrowing saying would push the nation down into “the black hole of debt.”

“Like other well meaning Nigerians, we consider this new bid for a foreign loan of $5.5 billion being sought by the administration of President Buhari as an attempt to push the nation down into the black hole of debt that will affect negatively, the future of this nation.

“As a party that governed this nation meritoriously for 16 years and handed over a buoyant economy to the All Progressives Congress in 2015, we are concerned that by the time Nigerians would have the opportunity to push out the APC government in 2019, the economy of the nation would have been damaged irreparably.

“We are dismayed at the rate at which the APC government is plunging the nation into debt through local and foreign borrowing without concomitant developmental projects in any sphere of the nation’s economy to justify the huge borrowing.

“The figure released recently by the Debt Management Office stating that the nation under the administration of the APC government in the last two years of being in office, has borrowed N7.51 trillion, is mind-boggling,” said Adeyeye.

But justifying his $2.5 billion loan request, Buhari invited the Senate to “note that in order to implement the external borrowing approved by the National Assembly in the 2017 Appropriation Act, the federal government issued a $3OO million Diaspora bond in the international capital market (ICM) in June 2017.The balance of the 2017 external borrowing, in the sum $3.2 billion is planned to be partially sourced from issuance in the ICM of $2.5 billion through Eurobonds or a combination of Eurobonds and Diaspora Bonds, while $700 million is proposed to be raised from multilateral sources.

“It should be noted that the intention is to issue the Eurobonds first, with the objective of raising all the funds through Eurobonds, and that Diaspora Bonds will only be issued where the full amount cannot be raised through Eurobonds.”

He listed the projects as the Mambilla Hydropower Project; construction of a second runway at the Nnamdi Azikiwe International Airport; counterpart funding for rail projects and the construction of the Bode-Bonny Road, with a bridge across the Opobo Channel.”

WHO characterises COVID-19 as pandemic

Boko Haram: Where Are the Borno Elders Now?