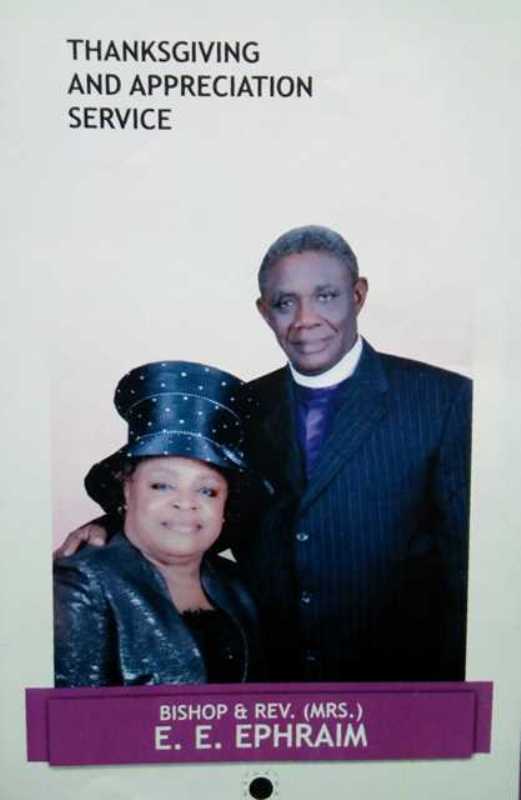 Bishop Enebong Ephraim, chairman of the board of trustees of Pentecostal Assemblies of the World, Nigeria Council and diocesan (general overseer) of the church for 17 years (until 2010), has handed an invaluable present to African Christians. It is his latest work, a carefully researched and painstakingly written book that captures the very soul of contemporary church’s greatest need – revival.

The Next Fire of Revival, which was presented to the public on his 70th birthday – September 10, chronicles the pattern and impact of some major Christian revival across the world, after the Day of Pentecost and explains why a new wave of revival tarries even as it urges the body of Christ to pray till it comes. Earlier revivals reflected in the book took place in America, Europe, China and Africa in the 1700s, 1800s, the 1970s and 1980s and include the Azusa Street Revival in Los Angeles, California in 1906, the Shantung Revival in North China in the 1900s and the one that  blew across Africa, particularly Nigeria in the 1970s and 1980s.

The church had a dark age, which Ephraim painfully presents in the second chapter of the book. The persecution during Rome’s papal supremacy and the darkness of the middle age spanned some 1000 years.   John Wycliffe, a professor of the University of Oxford and herald of the Reformation in England was a victim. Forty years after his death, by a decree of the council of Constance, Wycliffe’s bones were exhumed and publicly burned and the ashes thrown into a neighbouring brook. John Huss, a professor and rector of University of Prague and Jerome, a native of Prague and close associate of Huss, were at different times tied to the stake and burnt for their defence of the gospel. But Martin Luther King, the world’s greatest reformer, was lucky. Ephraim uses the section of the book on martyred Christians to stress the need for today’s faithful to learn about and emulate the doggedness of the early reformers and martyrs.

The first notable revival fires that swept began in United States’ cities of New York, Pennsylvania, Massachusetts, and Ohio after Charles Grandison Finney, a brilliant American lawyer was converted in 1821 and had submitted to the Presbyterian Ministry, where he was given to intense and fervent praying. According to the book, a single revival in Utica, New York in 1826 brought some 3,000 converts into the Church. The spate of revival that followed included those of John Nelson Darby, a former clergy of the Anglican Church of Ireland (1800-1882), that of Edward Irving (1792 t0 1824) a former Scottish Presbyterian minister, who founded the Catholic Apostolic Church.  There were also those of Barton Stone, Thomas Campbell and Alexander Campbell.

Finney, Asa Mahan and Thomas Upham are said to have laid the foundation for the Holiness Revival in the 1800s and the Pentecostal Revivals of the 1900s, which stressed definite conversion experience, baptism in the Holy Spirit and Christian perfection.  The book points to John Wesley’s Methodism, which held sway a century earlier, as the most organised denomination in America after the Roman Catholic Church while the evangelical foundation of Dwight L. Moody (1837-1899), is noted for strengthening revivalist movements in America and England.

Another memorable era of revival captured in the book is that of 1945 to 1951.  According to the book, that era witnessed the emergence of healing revivalists like William Marion Braham, Granville Oral Roberts, Morris Cerrullo, Jimmy Swaggart, Kathyrine Kuhlman, Robert Shamback and David Terrell and charismatic movements like the Full Gospel Businessmen Fellowship, founded by California’s Demos Shakaria. The book says the Nigerian revival of the 1970s affected many young people in schools with many of them being easily referred to these days as ‘father of the faith.’

Also is George Whitefield, an Anglican priest, who preached puritan morality and Jeremiah Lanphier, a quiet and zealous New York missionary, who attracted revival through noonday prayer meetings for merchants, mechanics, clerks and businessmen. The book quotes newspapers as reporting in their front pages that 6,000 people attended the prayer revivals each in New York and at Pittsburgh.

Revival did not only take place in America and England.  Ephraim’s book also captures the revival that swept through Shantung in China between 1927 and 1937. It says that the Shantung revival, which came after the invasion of the country by the Japanese Imperial Army and the overthrow of the government by the communists, led by Moa Tse-tung in 1947, began after a young unmarried missionary, Marie Monsen prayed for the wife of Charles Culpepper, a Southern Baptist missionary, who was at the verge of going blind.  The healing attracted many people to the church who confessed their sins and followed Christ.

The book is a dossier on the famous Azusa Street Revival of 1906 to 1909, which ushered in the worldwide 20th Century Pentecostal Renewal the author describes as the greatest event affecting modern Church history. “By this single revival was issued a movement which by year 2000 numbered over 250,000,000 classical Pentecostals in over 1 million churches and missions in practically every nation of the world. In addition to the Pentecostals, there are over 300,000,000 charismatic and ‘New Charismatic’ in every denomination who can trace their spiritual heritage to the Azusa Street meetings”, says Ephraim.

Ephraim credits three persons with the Azusa Street Revival. They are Charles Parham, a strong defender of God’s standard of holiness and proprietor of a bible school, whose students became major players in the revival. Parham is said to have had over 25,000 followers by 1905. William Seymour, a black holiness preacher is being remembered as the vessel God used to start the revival. He was invited to speak in a small Black Holiness Church, pastored by Julia Hutchins in the Spring of 1906 but was denied opportunity to deliver because his teachings were considered contrary to those of the Holiness circles in Los Angeles. In the circumstance that he found himself, Seymour found a place to pray and later developed a prayer fellowship that became instrumental to the great revival.

Frank Bartleman, a journalist is also being remembered for giving publicity to activities of the revival. He was born in 1871 and converted in 1893 at the age of 22. “His journalism not only informed the world about the Pentecostal Movement, but in a large measure also helped to form it”, Ephraims says of Bartleman.  The Azusa Street meetings attracted visitors from across the world. “When Florence Crawford visited from Portland, Oregun, she took the Azusa paper titled “The Apostolic Faith” and made it the name of her new Pentecostal denomination”, the book reveals. In its coverage of the Azusa Street Revival meetings in April 1906, Los Angeles Times referred to speaking in tongues, which they saw there as “weird babble” and Seymour and his followers “a set of fanatics.” Ephraim says the report (carried on page 138 of the book), created curiosity and bigger crowds for Seymour’s meetings.

The PAW boss believes strongly that another move of revival will soon hit the world.  This belief appears to take root in the prophecies in the Bible and from God’s servants over time. He cites Joel 2: 28-29, “And it shall come to pass afterward, that I will pour out my Spirit upon all flesh; and your sons and your daughters shall prophesy, your old men shall dream dreams, your young men shall see vision. And also upon the servants and upon the handmaids in those days will I pour out my spirit.”

He says that God is willing to send down revival to the ends of the earth but denomination, human tradition, prejudice, cultural concept and custom are common factors delaying it. The Next Fire of Revival, a 198-page book also says God is searching for someone to use to start the next revival which the author believes will begin in Nigeria, and in southern Nigeria to be precise. He likens the next wind of revival to a Tsunami for impact and says it will not be in one place but in multiple places.

Bishop Ephraim, who was called to the ministry in 1971, holds a Master’s degree in Business Administration for Professional Managers from Pepperdine University, Los Angeles and a Doctor of Divinity from Calvary Bible College in Columbus, Ohio, United States. He is a past chairman of Pentecostal Fellowship of Nigeria, PFN, and a former vice chairman of Christian Association of Nigeria, CAN, all in Cross River State.

Akpaekong is a public affairs analyst

2019 elections set to be Nigeria’s most expensive

What’s the big deal about cryptocurrency?

NNPC in fresh illegal withdrawal of N360bn from NLNG accounts