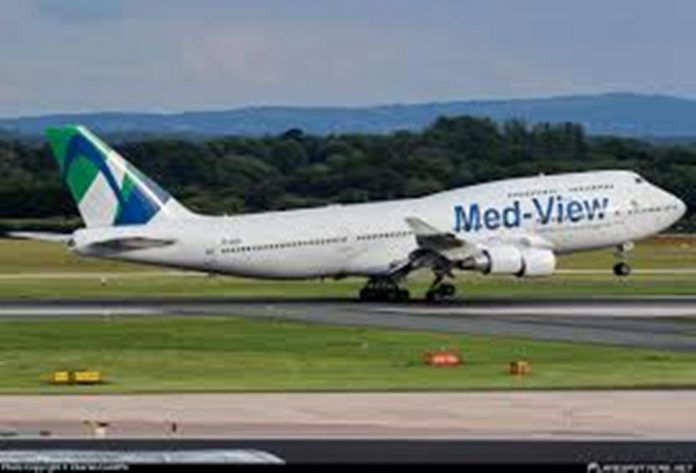 Med-View Airline, which cancelled its international flights between December 22 and 27, 2017 thus disrupting the plans of Lagos-London, Lagos-Abuja-Dubai passengers for the Christmas holiday, has apologised to the travellers who were affected by what it describes as “operational hitch.”

“It would be recalled that on December 28, 2017, a horde of stranded Lagos-London and Lagos Dubai passengers besieged the airline’s counters at the international wing of the Murtala Mohammed Airport, Lagos after waiting for many days to be flown to their destinations.

When that was not enough, they matched to the headquarters of the Nigerian Civil Aviation Authority (NCAA) where they registered lodged their complaints with the consumer protection directorate of the agency.

In a statement issued in Lagos today, the chief executive officer of the airline, Mr. Muneer Bankole tendered “unreserved apology” to the affected passengers.

“We sincerely offer our unreserved apology to all our esteemed customers/passengers for the inconveniences experienced between December 22 and 27, 2017 due to challenges in our flight operations.

“We recognized and acknowledged that the little we did to ameliorate your pains cannot compensate adequately for the days you lost, and not being able to meet with your loved ones or keep important appointments during the Yuletide season while your flights were rescheduled,” he said.

He explained that the airline’s ordeal started on December 22, 2017 in the UK when its fully boarded B777 aircraft made an air return to London Gatwick for safety reasons, which called for serviceability checks and certification lasting 72 hours.

He said the airline’s efforts only paid off on December 24, 2017 with relief flights but the holiday period compounded the backlog of passengers, which stretched to December 27 even though two aircraft were deployed.

He thanked all the passengers who showed understanding and perseverance while the airline made efforts to tackle the challenges.

“All our operations are woven round on the safety of passengers and crew, and nothing will compromise this,” he added.

While thanking the clients for their patronage over the years, Bankole also said the airline had normalised its flights on the Lagos-London and Lagos-Abuja-Dubai routes.

Meanwhile, reactions have trailed the apology with analysts telling the airline to always do the right things on time.

“Apology is good, but it should be timely and appropriate. Nigerian-owned airlines should learn to do the right things at the right time. If a flight is cancelled, the passengers should be informed on time.

“First needs should be provided, where necessary. Passengers who insist on travelling that same day should either get immediate refund or endorsed on other carrier’s flight. When it exceeds 48 hours and passengers begin to disrupt operations at the airports and beat up airline staff then it becomes infantile on the part of the airline’s management itself. There is no provision for apologies in the Nigerian Civil Aviation Regulations (Nig.Cars) in lieu of performance/deliberate gaffe,” said an analyst who preferred anonymity.

“I would urge the airline to learn from the incidents of the last few weeks of 2017 and get better. Although there are issues everywhere, they can doo better. The airline has a lot of work to do to redeem its image,” said another analyst.

Buhari: From virtual to isolated presidency