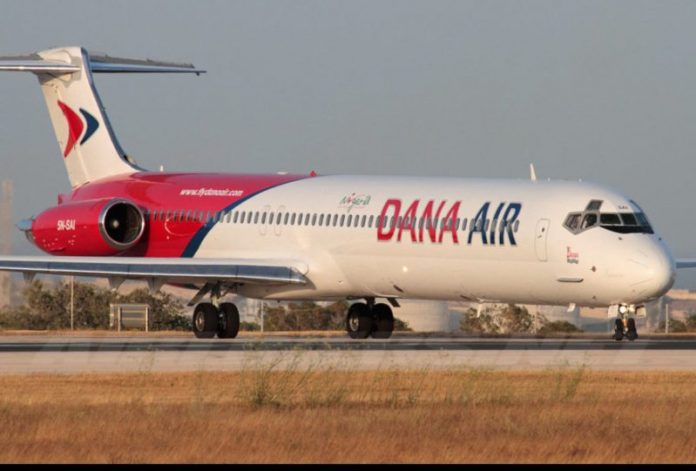 The management of Dana Air has said that it is committed to global safety standards and would submit its operations to auditing as ordered by the federal government.

The airline stated this in Lagos while reacting to the federal government’s directive for a full audit of the airline’s operations following serious incidents involving the airline in recent times.

The airline said in a statement that it welcomed the audit adding that “we are willing to work with the team and the federal government to demonstrate our commitment not just to flying but to flying safe.”

“In 2013, the Nigerian Civil Aviation Authority (NCAA) and its foreign partners, the Flight Safety Group, carried out an audit on our operations and in 2016, as a result of our commitment to global safety standards.

“We applied to become a member of the International Air Transport Association (IATA), went through their audit and subsequently became a member in 2016,” it added.

Dana thanked the Accident Investigation Bureau (AIB) for releasing the preliminary report on the Port Harcourt runway incident involving one of its aircraft on February 23, 2018.

“Excerpts of the reports confirmed that the air traffic control, an arm of the Nigerian Air Space Management Agency (NAMA) that is saddled with the responsibility of issuing instructions that the pilots are required to obey, had cleared the pilot in command to land.

“It is pertinent to note that the pilot of that flight is a happily married man and a proud father of three beautiful children. He has over 30 years experience in the aviation industry and is one of the very best in his profession, meticulous in his duties, and headhunted from another domestic airline where he also served as the head of safety and quality standards.

“Considering the safety measures that we have put in place and our huge investment in training and retraining of our crew and pilots, we decided not to join issues, but to rather wait on the report of the AIB, the authentic body responsible for such investigations.

The airline expressed appreciation to the minister of state for aviation, Senator Hadi Sirika, who, according to it has “proven himself as a technocrat, and our esteemed guests for keeping faith with us while the incident was under investigation and we wish to reassure our guests of our commitment towards providing safe, reliable and affordable air transport.

Besides, the airline said its route expansion programme was still intact.

“Our route and fleet expansion programme is still very much on course and we remain dedicated to our recent interline and aircraft partnership with Asky Airline, another formidable airline in Africa.

It would be recalled that the federal government had ordered a full audit of the operations of Dana Air following mishaps involving the airline in recent times.

On February 8, 2018, one of the emergency doors of Dana Air aircraft conveying them fell off on landing at the Nnamdi Azikiwe International Airport, Abuja.

Although no life was lost in the incidents, many began to call on the government not to allow things get out of hand before taking action.

At the federal executive council meeting on Wednesday, council resolved that the airline should be audited.

“A lot of quality time was spent discussing air safety. The government of Nigeria is very much concerned about safety and the life of Nigerians, this is following the recent air incidents minor as they were because they are no fatalities, the government did feel concern and the minister did the report to the council on steps that were taken following the last incident in Port Harcourt, Dana aircraft overshooting the runaway.

“As soon as that happened, a few seconds, a rescue team was there on the ground and few moments thereafter every passenger on board was evacuated, there was no harm to persons and this is something that should be celebrated.

“Within 24 hours an official investigation had commenced because investigators arrived in Port Harcourt and began work. One week after that a preliminary report was prepared and it was on this that the council was briefed.

“Consequently as announced by the aviation authorities, the engineer and Pilot of that particular aircraft got their licences both suspended and beyond that the government has ordered a complete audit of Dana airlines in terms of personnel, operations, technical capacity,” said presidential spokesman, Mr. Garba Shehu, after the meeting.

BBC #SexForGrades, UNILAG you can do more