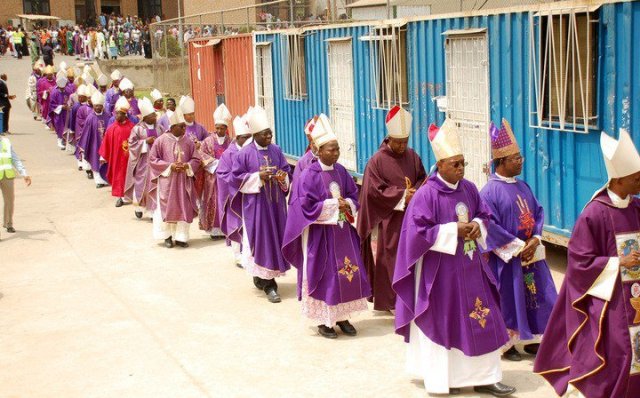 Nigeria is in a state of emergency–Onaiyekan

Catholics in Lagos, Edo, Oyo, Benue, Lagos, Kaduna, Adamawa, Kwara, Bayels states and other parts of Nigeria today organised a nationwide prayer and peaceful protest against incessant killings and attacks in some parts of Nigeria.

The Catholic faithful who marched peacefully on major streets in the country said the protest was in response to the directive by the Catholic Bishops’ Conference of Nigeria that all Catholic faithful in Nigeria should embark on a peaceful and prayerful protest. 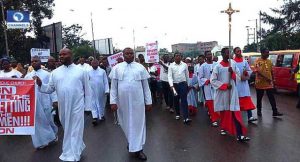 The members were directed to be dressed in “all Catholic society groups, apostolate, Bishop’s installation or parish uniforms.”

Those who do not have any of those were advised to be dressed in a white top while “priests shall be in cassock and habits.”

The protest was also organised in solidarity with the 19 worshippers, including two Catholic priest killed in Benue State by some vicious herdsmen during mass.

The protesters carried placards with various inscriptions some of which read: ‘Stop the killing of Christians! You can’t defend God’, ‘FG, stop bloodletting by herdsmen’, Love your neighbor and your enemy’, ‘Release Leah now’, ‘Enough of bloodshed in Nigeria’ ‘Justice brings peace’, among others. 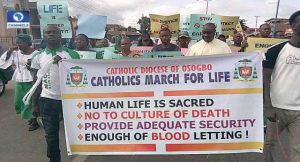 Meanwhile, the two priests and 17 other worshippers who were killed by suspected herdsmen in Gwer local government area of Benue State on April 24, 2018 have been buried.

The two priests, Rev. Fathers Joseph Gor and Felix Tyolaha, were killed on the altar during a mass along with 17 worshippers when the attackers invaded St. Ignatius Quasi Parish Ukpor-Mbalom in Ayar-Mbalom community.

Speaking at the burial, the Cardinal of the Abuja Catholic Diocese, John Cardinal Onaiyekan, called on Nigerians to rise above religious, political and ethnic divides to save the country from drifting into anarchy.

He said the killings across the country must stop and called on well meaning Nigerians to unite in fighting the great evil that had befallen the country.

“This must not be politicised. The nation is in a state of emergency. We demand for synergy; division, especially on tribal lines will only throw our nation to anarchy,” he said.

He called on the federal government to act decisively to end the spate of killings across the country.

The cardinal called on the people to be vigilant and be their brother’s keeper.

He warned that if murderers were allowed to continue killing without checkmating them, it will come to a time when people will begin to use other means of self defence.

Onaiyekan called for forgiveness and warned against reprisals, adding that the souls of the righteous are in the hands of God.

Also speaking, the Bishop of Makurdi Diocese, Most Rev. Wilfred Anagbe, said the decision to bury the victims at the ‘Se Sugh Maria Pilgrimage Centre, Ayati, was to honour them as martyrs of the church.

He said the barbaric acts perpetrated against the victims would attract the wrath of God and lamented the act of desecrating the church of God.

He asked: “If our places of worship are no longer safe, then where can we run to in this country?”

He expressed optimism that their blood would restore peace and end the killings in the state and across the country.

Husband and wife, 11 children infected with coronavirus disease in Spain

Police arraign 2 men for making audio and video recordings during...