Former president Olusegun Obasanjo’s son Olujonwo has requested that the court annul his one-old year-old marriage to Tope, the daughter of the founder of Premier Lotto, Kessington Adebutu, popularly known as Baba Ijebu.

This was revealed after several court documents surfaced on the internet. 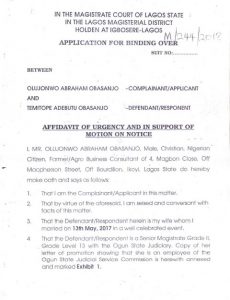 Tope, the documents stated, has physically assaulted and made several attempts at his life.

Recall that his mother, Taiwo Obasanjo, tried to prevent the flamboyant marriage from happening before his 34th birthday in June ‘claiming’ spiritual reasons but failed to after both fathers of the couple intervened leading to the marriage in May.

Unfortunately, Olujonwo returned to his father’s house in Abeokuta seven month later because of the problems stated in the documents.

The traditional marriage was held on May 11, 2017 while the church wedding took place on May 13, 2017 at the Methodist Church of the Trinity, Tinubu, Lagos.

With The Guardian report