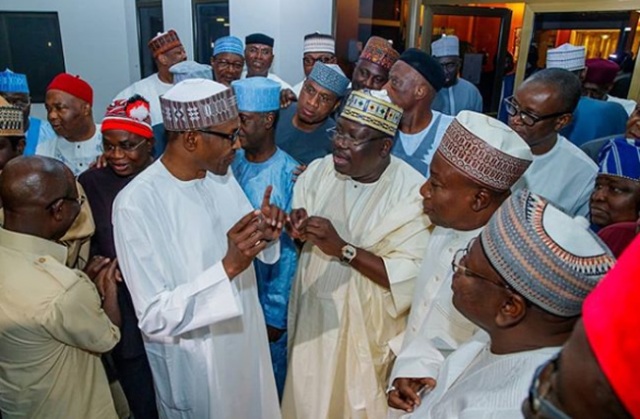 As gale-force wind blows in the All Progressives Congress, President Muhammadu Buhari has met with 42 senators of the party.

The meeting which was held around 10.03pm on Wednesday at the Presidential Villa was attended by 42 Senators, the national chairman of the APC, Mr. Adams Oshiomhole, the secretary to the government of the federation, Mr. Boss Mustapha, among others.

However, the senate president, Dr. Bukola Saraki (Kwara), Mr. Ahmad Sani Yarima (Zamfara), and the senate chief whip Olusola Adeyeye (Osun) were among the 10 APC lawmakers who were absent at the meeting.

The meeting was convened following the defection of 51 APC lawmakers from both chamber of the national assembly on Tuesday.

However, it was gathered that there was a mild drama when Senator Lanre Tejuoso (Ogun) arrived at the venue of the meeting.

During introduction, he told the president: “Your son has returned home”. Tejuoso was one of the senators who announced their defection from APC to PDP on Tuesday.

Number of billionaires worldwide increases by 10%