The senators in a two-page letter appended to by all the 49 lawmakers affirmed their support for the current leadership of the Senate.

They stated emphatically that they were against any move to impeach both Saraki and Ekweremadu.

See the signatories below: 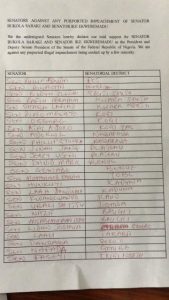 The other side of Palm Sunday

A nation on ventilator… (1)

Akwa Ibom REC: They want me removed because I’ve refused to...