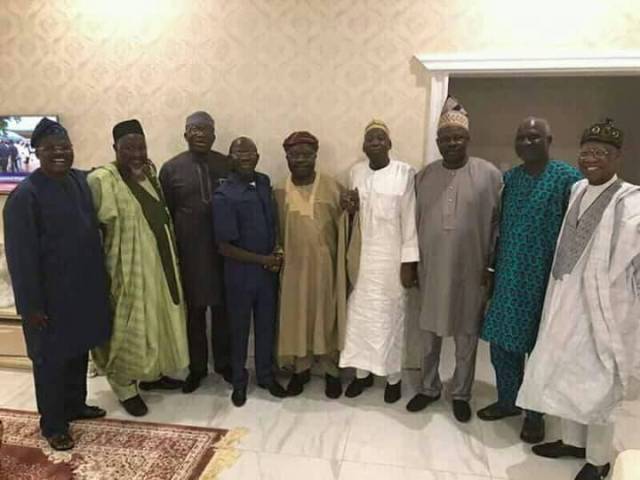 Ahead of Thursday’s governorship rerun in Osun State, a horde of All Progressives Congress (APC) leaders including governors elected on the platform of the party visited the governorship candidate of the Social Democratic Party, Senator Iyiola Omisore, in his Oduduwa Estate home, Ile-Ife and pleaded with him to support APC candidate, Alhaji Gboyega Oyetola in the election

Others were the national chairman of the APC, Mr. Adams Oshiomhole; deputy speaker, House of Representatives, Mr. Lasun Yusuf, minister of information and culture, Mr. Lai Mohammed and.

Although details of the visit were not disclosed, it is believed that it was in connection with the rerun which is a straight fight between Oyetola and the candidate of the Peoples Democratic Party, Senator Ademola Adeleke.

APC’s director of publicity, research, and strategy in Osun State, Mr. Kunle Oyatomi, confirmed the meeting saying: Our leaders went to Senator Omisore’s residence and had a good talk with him. We are optimistic that we will win the election and both sides will benefit from that discussion.”

It would be recalled that Fayemi had, on Tuesday visited the governorship Omisore in his Ile-Ife home barely 48 hours after the senate president and presidential aspirant of the PDP, Dr. Bukola Saraki and other party faithful paid Omisore a similar visit.

Meanwhile, the PDP expressed optimism that it would win governorship supplementary election.

The election holds in seven polling units in the state on Thursday.

The party’s national vice-chairman (South-West), Mr. Eddy Olafeso, stated this at a news conference in Abuja on Wednesday.

“For us, we are very confident that victory will be ours tomorrow. We already won anyway.

“PDP is not bothered because our people are resolute. And they are desirous in ensuring that the victory denied us on Saturday will eventually be ours.

“We have spoken to our people and we are certain that their experience from the current administration is enough for the need for a change that will bring development to the nation,” he said.

It would be recalled that during the first ballot conducted on Saturday, September 22, Adeleke polled 254,698 votes while Oyetola garnered 254,345 votes.

However, the returning officer and vice chancellor of the Federal University of Technology, Akure, Prof. Joseph Fuwape declared the election inconclusive saying the PDP flag bearer could not be declared the winner because the number of votes cancelled – 3,498, was higher than 353 by which Adeleke defeated Oyetola.

“This is as a result of areas where results were cancelled, there was no voting or there were disruptions”

“Based on the results collated by the Returning Officer, the margin between the leading candidates is 353, which is lower than the number of registered voters in the affected areas. Extant law and INEC Guidelines and Regulations provide that where such situation occurs, a declaration may not be made,” said INEC.

Omisore is believed to be strong in the polling units in Ife North and Ife South thereby making him the beautiful bride to be courted by the two strong contending political parties.