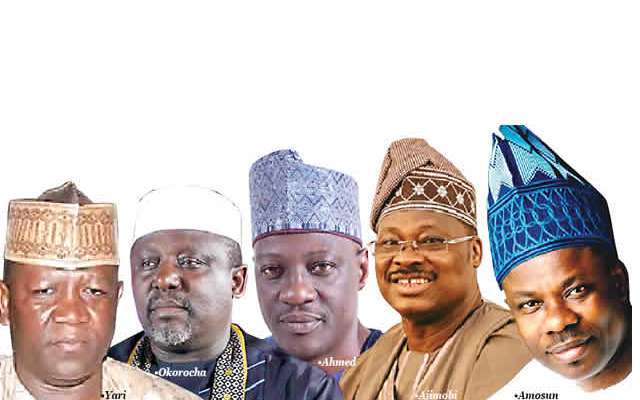 The ruling All Progressives Congress (APC) and the opposition Peoples Democratic Party (PDP) have picked 25 current and former state governors as their senatorial candidates for the February 14, 2019 election.

Kano and Kwara states lead the pack with five serving and former governors jostling for the senatorial seats.

According to the NewTelegraph the APC has 17 serving and ex-governors as senatorial candidates for the 2019 poll.

The PDP, on the other hand, has eight serving and former governors contesting to win senate seats.

Also, six serving and former deputy governors are in the race for senatorial seats at the 2019 general elections.

The senate is made up of 109 senators drawn from all the 36 states of the federation while the Federal Capital Territory (FCT) has one.

Out of the number of senators currently in the house, 16 are former governors, representing 14 per cent of the members.

However, the fraction of ex-governors in the senate may rise to 23 per cent if 25 of the 26 current and former governors become victorious at the next general elections.

Two of the governors – Ibrahim Shekarau and Rabiu Kwankwaso are facing each other in Kano State.

Of this number, three have kissed the national assembly goodbye and they include, Yerima, Ibrahim and Dariye.

Dariye is currently serving out a 14-year jail term in Kuje prison, Abuja, and that rendered him ineligible for the election.

Both Yerima and Ibrahim have ended their fourth term bid in the senate as the current governors – Ibrahim Geidam (Yobe) and Abdulaziz Yari (Zamfara) – are taking over their seats.

Ibrahim and Yerima had to pave the way for the current governors of their states to contest the 2019 elections.

Interestingly, Kwara State would be having three former governors represent it in the senate between 2019 and 2023.

The senatorial seat of Dariye, who was sentenced to 14 years’ imprisonment over financial misappropriation while in office as governor, was won by a retired commissioner of police, Mr. Hezekiah Dimka.

Dimka won the Plateau Central Senatorial seat after scoring 1,306 votes to beat three others for the ticket.

Governor Ahmed of Kwara had a smooth ride for the PDP Kwara South ticket, as he was able to dislodge the current occupant of the seat, Senator Rafiu Ibrahim, who is a protégé of Senate President Saraki who has also picked up the nomination form to seek re-election under the platform of the PDP.

In Ogun Central, Amosun, who was in the Senate between 2003 and 2007, but got elected as governor in 2011, used his power to oust the incumbent senator, Prince Lanre Tejuoso, also of the APC.

The governor will, however, be facing the likes of Abisola Shodipo-Clark, the wife of Ijaw leader, Edwin Clark, who is running for the same seat under the platform of the African Democratic Congress (ADC).

In Kano, it will be a battle of two former governors as Shekarau of the APC slugs it out with his old foe, Kwankwaso of the PDP for the Kano Central seat. Kwankwaso is the incumbent senator and a presidential aspirant of the PDP.

For the APC, some of the former governors got fairly easy primaries as they got the party’s ticket unopposed. Among those  cleared by the party to contest unopposed are former Akwa Ibom State Governor, Godswill Akpabio and his ex-Delta State counterpart, Emmanuel Uduaghan.

In Abia North, Kalu, who had a smooth ride in picking up the APC senatorial ticket, is up against a familiar opponent in Senator Mao Ohuabunwa of the PDP who got a slight victory over the eminent businessman in the last senatorial election in the zone.

In 2014, Uduaghan, as a sitting governor was forced out of the senatorial race, as he couldn’t unseat Senator James Manager in the tussle for Delta South Senatorial District.

Similarly, Suswam’s 2015 bid to return to the national assembly was thwarted when he lost the Benue North senatorial election to a former national chairman of the PDP, Mr. Barnabas Gemade, who contested on the platform of the APC. Suswam would confront Gemade of the Social Democratic Party (SDP) in 2019.

In Borno State, Shettima collected the Borno Central Senatorial District APC ticket from the incumbent, Senator Baba Kaka Garba, who served as the governor’s agent at the primary poll where he polled 2,735 votes.

Meanwhile, the chairman of the Presidential Advisory Committee Against Corruption, Professor Itse Sagay described the development as “unhealthy.”

“I think it’s an unhealthy development and most objective people have not been happy about it. What it really means is the love of power. You are in one centre of power, but when the law terminates that with tenure, you quickly move to another big centre. Usually, they get nominated because they use their clouts as governors to push out any other deserving person.

“It’s undesirable and you find out that quite a number of them, not all, are usually under investigation before they completed their tenure as governors. I think they should give a breather to allow the investigation to complete because once they get to Senate, they tend to be obstructing most of those things using their powers and colleagues to block what is going on,” Sagay told New Telegraph.

Also, the executive chairman of the Civil Society Network Against Corruption (CSNAC), Mr. Olanrewaju Suraju, said the senatorial ambition of serving and former governors is a major threat to good governance.

“It’s a major threat to good governance, democracy, service delivery and even accountability. The trend of many of these former governors heading to the legislature is that they are not used to accountable governance.

“Go and check their antecedents in their states; they never allowed their state houses of assembly to check their books. What you are having ultimately is the same set of people who will be running a continuation of that level of one-man show. The Senate, and by extension the National Assembly, has the chances of being converted to the enterprises of some of the senators who see themselves as power brokers and influencers in the system. This will ultimately create a major source of the rift between the legislature and the executive.

“The other challenge is that quite a number of them don’t even understand the business of law making. They are using the Senate as a retirement ground where they still remain relevant in the political scheme and using it for negotiations,” he said.

For his part, the spokesman for Afenifere, Mr. Yinka Odumakin, said the senate should not be a retirement home for governors.

“I don’t think our Senate should be a retirement home for governors. After running a state for eight years, many of them are tired. Many of them are going there to do deals, seek for cover and negotiate. We should have vibrant people in the senate; we should bring on those who are ready to make sound input and not those who are on the verge of political retirement,” said Odumakin.

Atiku to appoint under-30 as minister of youth

As it happened in Imo election, it won’t be so Anambra...