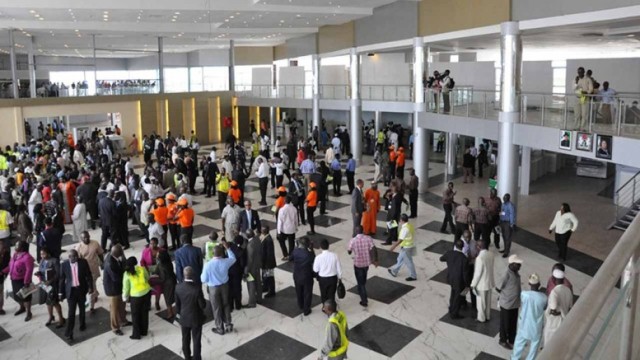 Airlines and service providers have lost over N3 billion as a result of the two-day face-off between the National Union of Air Transport Employees (NUATE), Air Transport Services Senior Staff Association of Nigeria (ATSSSAN) and the National Association of Aircraft Pilots and Engineers (NAAPE) on the one hand and Bi-Courtney Aviation Services Ltd (BASL), managers of the Murtala Muhammed Airport Terminal 2, Lagos on the other.

The unions had shut down activities at the terminal on Wednesday and Thursday due to a disagreement arising from the disengagement of 27 of their members by the BASL management.

The unions’ insistence on the recall of the sacked workers and BASL’s resolve not to accede to the demand led to the picketing of the terminal and disruption of flight and other services for two days.

Dana Air, in a statement by its spokesman, Mr. Kingsley Ezenwa said it lost N100 million on the first day of the lock down of the terminal while BASL said it lost over N120 million while the industrial dispute lasted.

“For now, we have lost over N100 million to the ongoing action and losing such money in an industry where airlines are still grappling with a myriad of challenges is unacceptable and disappointing to say the least,” said Ezenwa.

He said the amount included losses from “something called future sales, across the counter sales, cargo income.”

Other airlines, which kept their losses under wraps, might have lost as much as Dana.

However, investigation revealed that Arik Air, Max Air, Aero Contractors and Azman Air and others lost about N180 million each.

But the banks were badly hit.

One of the banks’ official who craved anonymity told NewsGazette that it makes cash transactions of N800 million daily.

“The transactions include deposits and withdrawals over the counter and from automated teller machines. You know our ATMs operate for 24 hours and there is no dull moment at the terminal. The showdown between the terminal manger and the unions really affected our business. Thank God it is over,” said the ban staff.

A staff of another bank who also craved anonymity said a similar thing.

The staff who described their loss as “colossal” said “on average we make close to N900 million daily.”

“Though it is a cash centre and we have a ceiling for deposits and withdrawal, the volume of transaction is still huge because there are lots of businesses here,” he added.

Others who lost substantial revenues were the fuel suppliers, KFC, Spar restaurateurs.

“On some good days, I make an average of N10000. But for two days, I made virtually nothing. I could not relocate to the general aviation terminal because I’m not registered to operate from there. I’m happy hostilities have ended and normalcy has returned,” said a cab operator.

Meanwhile, BASL and the unions have signed agreement to end the impasse.

The truce was reached after a protracted negotiation superintended by the Nigerian Civil Aviation Authority (NCAA) during which BASL acceded to recall the 27 sacked workers by today (Friday).

“Staff of BASL are free (as they have always been) to exercise their right of association by indicating their willingness to join any of the aviation unions. The management shall deduct and remit check off dues as required below.

“The 27 members of the union who were laid off shall be recalled without loss of pay or service and deployed to where their services are required within the Resort Group.

“Thereafter the company intends to declare them redundant and is willing to discuss their redundancy benefits with the unions in accordance with Section 20 of the Labour Act.”

Following BASL-unions pact, Dana Air announced the resumption of flights from the terminal.

Spokesman for the airline, Mr. Kingsley Ezenwa said in a statement “we have resumed flights from MMA2 following the agreement reached by MMA2 and the Aviation Unions today (Friday).

“We thank the management of BASL, operators of MMA2 for considering the economic implications and for putting national interest first in resolving the industrial action.

“We also wish to thank our teeming guests for their total understanding and cooperation in the course of our temporary relocation to the General Aviation Terminal (GAT) and we hope to continue offering the best of our services which we have come to be known for.”

He also announced a new promo called cash top-up’ for the members of the Dana Miles programme.

“As a result of Dana Air’s core values of improving customer experience, and knack for customer-centric innovations, the airline has also introduced a ‘Cash Top-Up’ concept for members of its loyalty and reward programme Dana Miles.

“The Cash Top-up allows our Dana Miles members to top-up their miles with little cash to enjoy the hospitality of our economy or business Class cabin.’’

Of COVID-19 cure and demon sperm