The representing Kaduna central in the senate, Mallam Shehu Sani, has called it quits from the ruling All Progressives Congress (APC).

In a letter dated October 19 and addressed to the chairman of APC, Mr. Adams Oshiomhole, the lawmaker did not state reasons for his resignation from the party.

However, it is believed that Sani’s exit is the fallout of the senatorial primary conducted in the state in which Uba Sani, special adviser to the state governor, Mallam Nasiru el Rufa’i.

The senator had already been promised an automatic ticket for standing with the party when a gale of defections engulfed it in both the lower and upper chambers of the national assembly but he had irreconcilable differences with el-Rufai who defied the national working committee of the party and conducted a primary election in which his candidate won.

The lawmaker, in his letter said he joined the party “with the belief that it will constitute a veritable platform for the realisation democratic ideals” but stated that “only posterity can affirm the extent to which the APC has committed to and reflected these values.”

The letter reads: “I present to you highest compliments and wish by this communication to formally offer to you my resignation from the All Progressives Congress (APC).

“I had joined the APC and remained with it against all odds with the belief that it will constitute a veritable platform for the realization of those democratic ideals which I hold very dear, that honour and integrity will be the ultimate ethos of the party and, most importantly, that internal party democracy will always be the norm. However, only posterity can affirm the extent to which the APC has committed to and reflected these values.

“As I exit the APC at this point in time, I wish to formally thank the party for availing me the platform upon which I am currently serving this country in the honoured capacity of senator of the Federal Republic.

“I wish the party well in all her future endeavours and ask, Sir, that you please accept the assurance of my highest considerations.”

Reacting to Sani’s resignation, Reno Omokri, former aide to the former president, Dr. Goodluck Jonathan took to his tweeter handle @renoomokri and twitted: “Poor @ShehuSani. When you should have honourably left with @BukolaSaraki, you allowed yourself be deceived by Oshiomhole’s empty promise of ‘automatic ticket’. Now that automatic ticket has become automatic trick, you now realise you were used and dumped 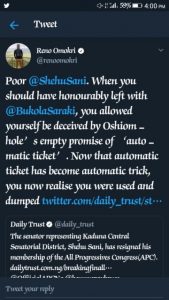 Similarly, the representative of Kogi West, Senator Dino Melaye also twitted: “Sen Shehu Sani has just dumped D APC. People who did not like you in the morning & afternoon but claim to like you at night, i beg borrow urself some brain. Baba God i thank you say i no become suya in the hands of cash & carry party. (APC) Aboki accept my condolence…Oh my home” 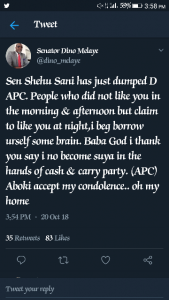