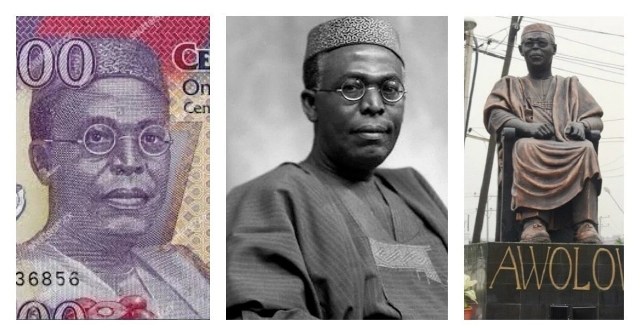 Over the years politicians have adopted mediums to represent their ideals or drive home their messages. A consistent hand-raise, a unique fashion choice, a repeated gesture or mannerism and a political symbol is birthed.

With the 2019 elections, less than a month away, here are four figures whose style and gestures have become political symbols.

Every bust, every full-sized statue and most of the public pictures of Chief Obafemi Awolowo, had two major features, the thick circular rimmed spectacles and the iconic Awo fez cap. The cap caught on as the symbol for Awolowo’s staunch followers called Awoists. The first premier of the western region had far-reaching ideals that impressed on many people.

Former Lagos state governor and All Progressives Congress National Leader, Bola Tinubu, was one of those who learnt from such ideals as well as the circular spectacles.

“I borrowed from Pa Awolowo is the vision to see through a frame. There is the discipline and ability to go through tribulations and convert it to success. I love him. Baba existed in a different political era completely, but there is that self-discipline and intellectual capacity to govern,” Tinubu told the Sun.

The best political messages are simply distilled and easy to reproduce. The 4+4 hand gesture by President Muhammadu Buhari’s campaign team in a bid for his re-election is simple enough to catch on. APC’s rallies across the country have seen the pictures of the President and his supporters with four fingers on each hand raised, signalling an extra four years to his first tenure.

The message is loud and has even been reproduced as for further visibility.

The first pictures of the gesture emerged during the President’s budget presentation to the National Assembly. It is not clear whether that gesture was rehearsed before or enabled by a spur of the moment elation, what is clear is that the symbol is arguably the most reproduced since the campaign started.

Donning a red cap in the metropolis of Kano gives the unmistakable impression that you are part of the Kwakwansiyya movement. Senator Rabiu Kwankwaso has made the red cap a political fad that his followers don in support of their principal. It was therefore symbolic when some Kwankwasiyya defectors burnt their red caps signalling their departure from the group. With thousands of members in the movement, Kwankwaso has grown his political influence since his days as a governor in Kano state.

At the roundabout in front of the United Bank for Africa headquarters in Marina, Lagos State, there is a sculpture of circular-rimmed glasses and a bent Yoruba traditional cap with what looks like an infinity sign embroidered on it. There’s no head but you can immediately with the former governor of the state Asiwaju Bola Tinubu.

The national leader of the All Progressives Congress has kept the signature embroidered cap as part of his look for decades.

The embroidered symbol on the cap is a broken shackle depicting freedom, according to Tinubu.

“Philosophically, it is my belief and faith in education, freedom fighting. On my cap is a broken shackle. It is freedom. The shackle is broken and you cannot put us in bondage anymore. You have broken the shackle of poverty, ignorance, disease,” Tinubu said.

“You develop the capacity to improve the quality of the lives of the people. It has been my philosophy and it will remain my philosophy. My office’s symbol is Freedom House. Freedom means everything to me, the freedom of man. You can find me on the street fighting against injustice.”

Drug trafficking: Lagos socialite turns in self to NDLEA

If priests can’t vie, who can?

Short of oxygen and God’s mercy

The (un)making of Nigeria

I am no fan of Gorbachev