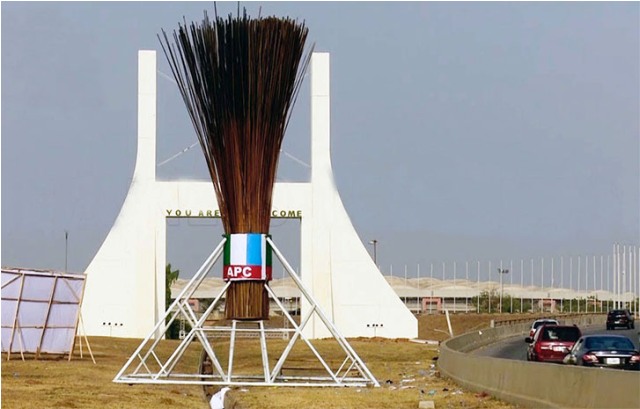 Nigerians woke up recently to see giant broom monuments being erected on the hallowed grounds of the Abuja City-gate and the Abuja Unity Fountain by yet-to-be-identified individuals.

Sequel to the dust that this issue kicked off, the National Publicity Secretary of the All Progressives Congress, APC, Lanre Issa-Onilu, denied knowledge of those who put up the monument. He, however, admitted they were built by supporters of the President Muhammadu Buhari administration whom he did not identify. He also challenged the opposition to erect their symbols.

The broom is the symbol of the APC, just as the umbrella is the symbol of the main opposition, the Peoples Democratic Party, PDP. The rest of the dozens of registered political parties also have their unique symbols which they must adopt in order for the Independent National Electoral Commission, INEC, to register them. The main purpose of the party symbol is to guide voters in choosing the candidates and political parties to vote for during elections since the photographs of candidates are not featured on the ballot papers.

The outrage arising from this strange and unacceptable display of impunity is that the brooms were put up to share space on grounds specially set aside to display the symbols of our nationhood. The Abuja City-gate and the Unity Fountain are sacred grounds for the display of symbols and effigies of our collective compatriotism. They are equivalent to our national currency note, the Naira, the National Flag, the National Anthem, the Pledge, the Constitution and other objects, institutions and imageries signifying our common belonging to one nation.

We strongly disagree with Issa-Onilu’s retort that the opposition should feel free to build their symbols. This statement shows lack of understanding of the significance of the Abuja City-gate and Unity Fountain. The City-gate is the first structure that welcomes visitors (including foreigners) to Abuja, our centre of national unity. The Fountain has become a gathering point for citizens who wish to express their feelings about how Nigeria is being governed. No political party has the right to politicise or appropriate them for selfish ends. Political parties are enjoined to build their symbols on their private properties.

Those who built the broom monuments should be made to dismantle them forthwith. If they fell foul of our laws by their act of disrespect for our hallowed public spaces they should be sanctioned to serve as a deterrent to future misguided adventurers. These structures send the wrong signal that Nigeria belongs to the ruling party. We are a multi-party democracy.

We must guard against the growing impulse to desecrate our public institutions and national symbols. The dignity and status of Nigeria as a diverse, constitutional democratic nation deserves to be respected.

Monkeypox: Nigeria reports six cases, one death in May 2022

WHO report explains why men die earlier than women

Minimum wage to cost FG over N2.31trn in salaries