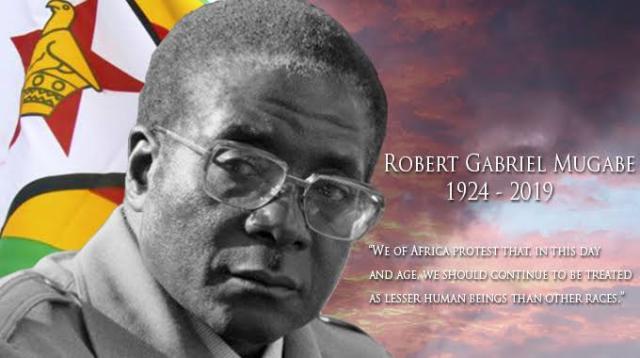 Without any speck of doubt Mr. Robert Mugabe can be regarded as the icon of the liberation struggle of Zimbabwe. He was one man, among a few others, who rose to his full height when duty called.

Armed with about half a dozen degrees, a bulky frame and a rough tongue, he carved the image of a man who was ready to lead his people to the land of freedom. The arguments for freedom against minority rule whether in South Africa or Southern Rhodesia or anywhere else are always unassailable at a universal level. But to get there has always been the difficult part.

Southern Rhodesia, now Zimbabwe, had been under the clutch of white minority rule led by Mr. Ian Smith. Mr. Smith had boasted that the independence of that territory would only happen after 1000 years; and certainly not during his life time. He declared what came to be called UDI, unilateral declaration of independence from the colonial master, Britain.

Strangely, inexplicably, Britain’s reaction to this illegal action was tepid. The British Government decided to send a war ship NS Tiger with the Prime Minister, Mr. Harold Wilson on board to hold talks with the rebel leader, Smith. This was not what the lovers of freedom expected from Britain.

So, it was obvious to black Africans of South Rhodesians descent that they would have no freedom except they were ready to fight for it. With a vicious white minority regime in power, that meant trouble, enormous trouble.

That is when the audacious Robert Mugabe took it upon himself to recruit other patriots such as Joshua Nkomo, Bishop Abel Muzorewa and Reverend Ndabani Sethole into the struggle. They adopted asymmetrical warfare called guerrilla war today. Mr. Mugabe was tried and imprisoned on a charge of sedition from 1964 to 1974. This was because of his opposition to minority rule in Southern Rhodesia.

After his release from prison in 1974, he relocated to Mozambique and led the struggle from there. That struggle which was largely a guerrilla affair came to be called the Bush War. Mugabe’s leadership in that epic confrontation, his seminal and poisonous remarks on minority rule and the exemplary courage that he exhibited throughout the struggle that led to Zimbabwe’s independence in 1980 are what can be regarded as the real pillars on which his relevance rests.

So, it would be correct to regard Mugabe as the icon of his country’s liberation. It is in acknowledgement of that contribution that he was made Prime Minister of that country from 1980 to 1987.

From 1987 to 2017, he was the President with extraordinary powers. So in all, Mugabe had ruled his country for 37 years.

Until he was forced out of office in a palace coup in November 2017 by the Military, that country knew only one man as its leader: Robert Mugabe.  By the time he was thrown out of office by the military wing of his party ZANU-PF, he had established himself firmly as the maximum ruler of Zimbabwe even though his age demanded that he should throw in the towel. On September 6, he died in a hospital in Singapore where he had gone for medical treatment.

There were mixed feelings at his funeral. But out of a sense of decency, African leaders gathered there chose to harp only on his role in the liberation struggle. And in Africa, it is said that you do not speak ill of the dead.

But it is true to say that Mugabe did well in the early part of his administration of Zimbabwe. As demanded by the black majority of his countrymen, he embarked on land reforms. This meant dispossessing the white farmers of the arable land that they controlled.

At the time of his ascension to power, the whites controlled 80% of the economy. His policy only took the land away from the whites but never gave the blacks the skills with which to turn the economy around. As a result, some of the white farmers emigrated and the deterioration in the Zimbabwean economy began.

Mugabe gave considerable attention to education. From 177 secondary schools that he inherited in 1980, he took the figure to 1548 by the year 2000. But he did very little in other areas such as health.

The public health system had virtually collapsed by the time he was thrown out of office. That was why he often travelled abroad for his own medical attention. It is a tragedy in Africa that even the well-off countries such as Nigeria do not provide good medical facilities for their citizens.

The result is that their leaders can seek medical treatment abroad at public expense while their countrymen can stay in their countries and die of poor medical attention. Some years ago when the World Health Organisation (WHO) was about to bestow an award on Mugabe, his countrymen told the global health body that the health facilities in Zimbabwe were nothing to write home about and that Mugabe deserved no such honour.

And throughout his time in office, Mugabe made Singapore his medical tourism destination. This was a country that was also a Third World country some years ago.

Also, Mugabe’s review of his country’s constitution to make him a maximum ruler did not serve the country well. The constitution review dispossessed the white minorities of the 20 parliamentary seats reserved for them. This caused considerable unease in the country. The decision was a ploy to get the black majority on his side while he acquired for himself extraordinary powers.

Such powers obviously led to the erosion of people’s rights and freedom. Additionally, it resulted in general oppression of the populace by his security operatives. In the last days of Mugabe as Zimbabwe’s President, the country had degenerated into something like Dante’s Inferno.

Oppression was rife; the economy was on its back. Further, the opposition was throttled; and there was a phenomenal growth in the poverty level. In addition, the currency was worse than toilet paper. Essential goods were hard to find and when found, the cost was sky-high.

Mugabe economics was incoherent because he was trying to fuse his ill-digested theory of Socialism with what he called Africanism. But perhaps what took the breath away was the depth of corruption around him and his family.

His extravagant wife, Grace had been nicknamed GG; that is Gucci Grace. A backhanded compliment for her exotic appetite for extravagance. Everyone knew that he was grooming this former Secretary of his for the presidency of the country. The generals thought it was time to pull the plug so that the abhorrent idea did not take firm root either in his mind or hers.

Besides, they were convinced that the law of diminishing returns had set in after more than three decades at the helm of office and that Mugabe was frail and not fully in control and that his wife had become the surrogate President. That is why they struck in 2017.

Africa is the only continent in the world where we have had Presidents staying in office for 20 years+. For example, President Museveni of Uganda has been in office for 33 years; and is still hanging in there. Also, President Paul Biya of Cameroon has done 37 years. This is the chronological age of the Prime Minister of New Zealand, Ms Jacinda Arden.

Lai Mohammed to Obasanjo: You’ve been too busy to notice Buhari’s...

Huawei forecasts 28.9% drop in 2021 revenue as US sanctions linger

All ongoing airport projects are to be completed before 2023 –...