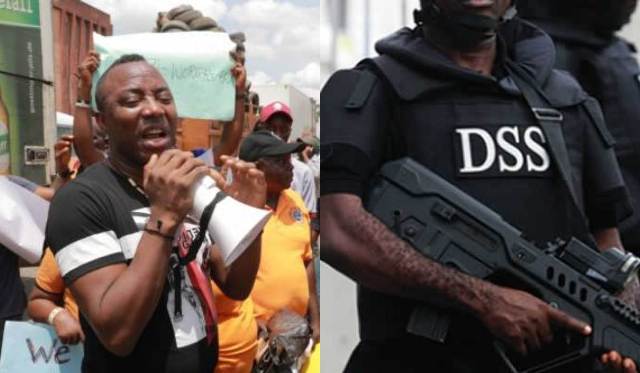 The Department of State Services (DSS) on Friday aborted all efforts to receive court documents directing it to release the convener of #RevolutionNow protest, Mr. Omoyele Sowore, from its custody.

It would be recalled that Justice Taiwo Taiwo of the Federal High Court, Abuja had on September 24 ordered Sowore’s release and gave the detainee 48 hours to fulfill the bail conditions which included depositing his international passport with the court.

By Wednesday, September 25, the detainee had fulfilled all the bail conditions.

Spokesman for the DSS, Mr. Nnochirionye Afunanya denied that the agency had had  received a copy of the court order, contrary to claim by Sowore’s counsel, Mr. Femi Falana, that it was duly received on September 24, the same day it was made by one Ayuba Adam of the DSS Legal Department.

Nevertheless, the DSS, today, put paid to attempts by a bailiff of the court to re-serve it with the order.

It was gathered that the bailiff, who arrived at the DSS headquarters in Abuja at 9:30am was asked to return by 12 noon when the director general of the service, Mr. Yusuf Bichi would be around.

However, upon his return at 12.14pm, the bailiff was denied access into the premises.

It would be recalled that the federal government had filed a seven-count charge against Sowore.

The charges bordered on alleged money laundering, treason, cyber stalking and insulting the president, among other alleged offences.

It should never take more than one disaster

Insecurity in Edo heightened by escape of 2, 000 prisoners- Obaseki