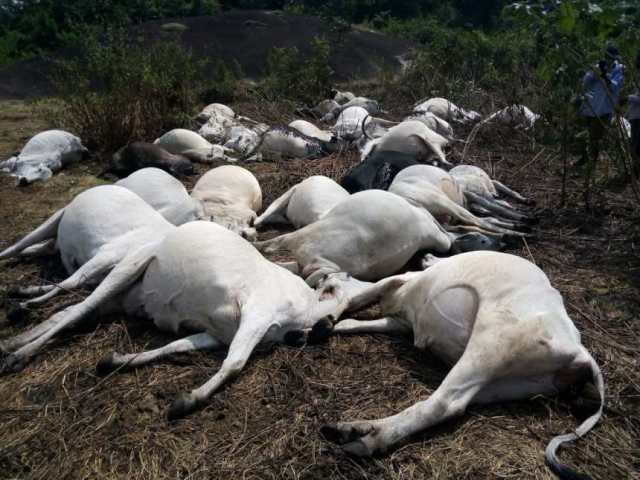 Nothing demonstrates the state of our democracy at independence like the cow, and the drama in Ondo State. The episode hit everyone in the country like a jolt.

The cows wanted to graze. The lush, green fields appetised the herds. The sky was soft and blue. Witnesses deny a cloudburst was in the offing. No one, not the herdsman, saw any omen in the heavens. They mooed and mulled to the mountain for a refuge of food and comfort.

The gods thought otherwise. The locals warned, just as the custodian of the deity. It was forbidden ground, don’t go there. But temptation often overpowers the senses. The cow shall not live by words, but by every blade of grass that lodges in the jaw.

Against the warning, they went. All 36 of them. It has a highland, close enough to the finger fury of the gods. Before they knew it, the sky opened with rage. Lightning flashed, thunderstorms roared, and all 36 fell. It was not like T.S Eliot’s A Journey of The Magi, whose wayfarers knew “a cold morning they had of it/ just the worst time of the year.”

The locals, and not a few Nigerians, believe the bovine tragedy was a case of divine revenge. The animals died. But the humans survived. Some have looked at it not from the scientific point of view. The study of geography shows that cows should be wary of grazing on mountains. One, it is close to the tempest of the sky. Two, they are often too exposed to get shelter, except trees which are actually traps of nature. You cannot avoid the storm by going under the tree. You should avoid the tree instead.

Superstition or not, some have said, aha, this is the solution to the herdsmen crisis. Let us import the gods of Ijare Hills – sounds like Soyinka’s Idanre Hills – and send them to the farms of states of Plateau, Enugu, Nasarawa, Mambilla, Benue, et al, and dare the bandits.

What happened was the spiritual equivalent of the abattoir. The bovine train did not need prodding. No lashes, no grumbles, no coercion. A Golgotha with a smooth trail. They mooed along of their own volition. The gods beguiled them to the pasture. A voluntary submission. They obeyed for the sacrifice. It was also different from the gas chambers of the Nazi era, where the Jews and Gypsies knew that it was death by incineration. When the gods struck, there was no mistake. The gods don’t shoot to miss. They fell all their targets. The spiritual abattoir is more to be dreaded than the familiar ones.

Except that it is not the cows that the people loathe in the farmers-herders crisis. It is the owners, not the cows. After all, even the custodians or priests of the gods also crave the temptation of a cow meal. Yet, not a hair of the herder died. According to all reports, it is the herder who harasses. They do the reconnaissance, they wield the guns, they mow, maul and destroy. They simply lead the cows along.

Here again, it is a story of how as a nation we always go after the wrong targets. We destroy what we should preserve. It is a metaphor of how we waste human resources, as we have done in the past 59 years. From day one, the prodigal has been our first principle. What have we preserved? Cocoa, groundnut pyramid, palm produce, rubber, crude oil, human talent?  As William Wordsworth noted in his poem, “The world is too much with us/ Getting and spending, we lay waste our powers.”

But the herdsman is the proper Nigerian, especially the elite. We do not respect rules, or the rule of law. They were warned to stay away from the hallowed ground. But greed overrides propriety. Just as we have not followed the rules in mining our resources across the 36 states, so the 36 cows symbolise the states of the federation. All of them fall to meaningless squander. It is Illegal bunkering on crude oil and gangsters of mineral resources. In agriculture, it is corruption. We import to kill the local farmer. Let us look forward in hope to see what we shall make of the border closures, which I support if we can turn it into policy to galvanise local productivity.

It is the same lack of respect for the rule of law that makes a Sowore to remain in detention in spite of court order, or Sambo Dasuki – no hero – to still squeak in silence. The herdsman is the elite. The cows, the masses of sort. When the storm comes, the elites have a way of escape.

He is safe, and all he needs is to tap into resources and start again, with a fresh consignment for plunder, or recruit new people for his schemes. The herdsman here represents the Nigerian state, as well, who leads the people astray.

They have no sense of justice, or vision to see what dangers lie ahead because they know that, somehow, they will always survive. The herdsman is no hero of his flock. He does not have the fidelity or empathy of Christ, who said if he loses one sheep he would leave the others and go after the lost one and make sure there is one sheep, one shepherd. Our leaders lead the flock to doom.

It is a lack of vision, and that has flourished darkly in our lack of grasp of systems. We have debated whether we should retain the presidential or Westminster system, as though we have not tasted both. The parliamentary system led us to civil war and bloodletting of siblings. The supporters say it is cheaper. Bunkum. It is not the system that it is cheap or expensive. It is Nigerians that are spendthrift. Unlike the presidential system with many rules, the parliamentary system anticipates the good conduct of the practitioners. Good conduct is a casualty with Nigerian politicians. Take for instance, if Nigeria faced a knotty case like BREXIT, the republic would have collapsed. But it is the level-headedness of the political elite in Britain that has maintained a brilliant chaos in the country. Ours led to civil war. The French, even the Russians, accept a mix, so that the strong office of the president can rein in the parliament’s tendency to anarchy.

The presidency was tested when Yar’Adua took ill, and we almost lost this republic but for the intervention of a strong system that made us appeal to the doctrine of necessity. The parliamentary system would have given us a death warrant.

The bovine episode also reflects the failure of the ecclesiastical order in the land. It is a land of worshippers, but not a land of progress. We believe but are not redeemed. The church leaders, Islamic clerics and juju priests have always been factors in our land, but they have never come through. Rather they leave us a mess, sometimes worse.

Now, what is left of Ijare matter but stench. There is plenty of meat, but they are all rotten. The gods will not clear them. Locals are staying away because the frowzy air threatens their peace. The state government has nothing to do with it, but the locals want the government to clear them. Will they need special auspices from the gods before government workers can dispose of the dead cows? Even the traditional ruler visits it once a year and after special permission. We don’t want any tragedy in which lightning strikes the workers. It will need an extra dip into government revenue to clear the mess the gods have made.

Of course, the locals fear diseases. It is not enough for the carcasses to fall in the wilderness. It is whether we can survive them.

This is how we waste our wealth. At 59, Nigerian leaders have a cow lesson.

Buhari: Yoruba can go to blazes

El Saadawi: Truth in a world that lies

Buhari scores another ‘F9’ at Ramadan