Home News When Oga Madams and other big guns were arrested 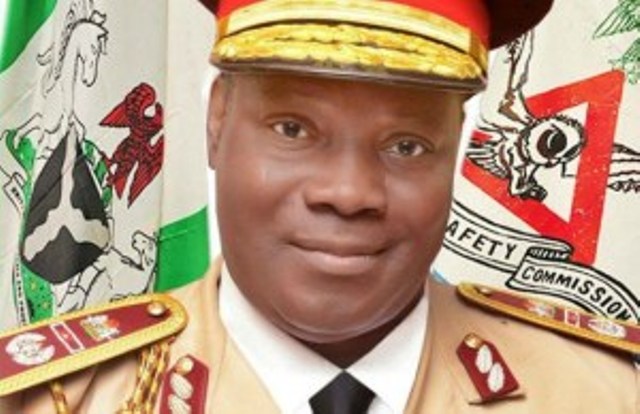 Honestly, the FRSC job has provided me opportunities to understand life better. It has also offered me the platform to learn from great men. Today, I will share with you two great encounters. Both concern the arrests of the spouses of our topmost ogas then. Yes, the wives of the then Chairman FRSC, Prof Wole Soyinka and the then Corps Marshal and Chief Executive, (COMACE) Dr Olu Agunloye.

The head of our Lagos operation then, Commander Ayo Oyedokun recalled the incident involving Mrs. Folake Soyinka. “I think it was sometimes in Feb or March 1990; barely one year into commencement of full operations on the Lagos-Ibadan expressway. A vehicle was spotted not keeping to the right lane and was pulled over. The passenger was very polite but did not introduce herself. Unfortunately, the driver could not produce his driver’s licence and vehicle papers in time as he appeared to be fiddling with big brown envelopes in the gloves compartment of the car. The Marshal booked the driver and took custody of the vehicle since the driver could not produce any of the papers. The vehicle was subsequently released at the FRSC base in Ojodu in Lagos after the driver came back with his driver’s licence and complete vehicle papers and paid the fine in full”. Nobody was questioned for the arrest and it passed as routine.

It took another six months before the COMACE himself filled in the gaps in a big joke session at an after-hour gathering. He recalled the case and said to the surprise of the boys how the Marshals arrested Mrs Soyinka. There was a mixture of surprise and excitement. Dr Agunloye told us that Mrs Soyinka had called him after the incident to say that when the Marshals flagged her down, she thought they had some problem and needed help, thinking they recognised her car. And that when it turned out that it was a case of wrongful use of lane, she left her driver to deal with the matter. She described how her car was eventually impounded noting that the crew was polite. She said, “it was either they did not recognise me or did not care who I was”. COMACE said when he asked her what happened after, she said she paid the fine and retrieved her vehicle later in the day. When Commander Oyedokun asked him “what do I do now?”, the former Corps Marshal responded without any hesitation, “Nothing, go ahead with your work”; adding that “Even Prof was proud of the action of the Marshals”.

I still remember Prof Soyinka’s statement in one of his addresses during our basic training in Abuja in 1988. The Chairman, Prof Soyinka while instilling courage and firmness into psyche of the Marshals had stated “Do your work without fear or favour. You will be confronted by the highly placed or their spouses; just carry out your duties diligently and with dignity”. No, wonder the Marshals did not hesitate to impound Mrs Soyinka’s vehicle when her driver could not produce his driver’s licence upon being apprehended. And Heavens did not fall.

The second incidence involved the wife of Dr Olu Agunloye, the then Corps Marshal and Chief Executive. That was in Ibadan, sometimes in 1993. Sister Bimbo, as we still call her, was reading and probably not concentrating on the driver’s action, when the driver violated lane rules. Sister Bimbo did not introduce herself when her driver was being apprehended and at the point of writing the ticket, one of the Marshals recognized her. Even at that, a ticket was issued to her driver. I also remember the ticket was sent later to me with the fines in Moniya. The Marshals were all excited. Nobody queried the boys for having the audacity to arrest “Oga madam” or for “being rude” to Oga at the Top. I remember I got in touch with Dr Agunloye and he stated ” Figaro, don’t bring me into the issue. I was not there when the offence was committed. Let the fines be paid but I must have my receipt” And that was it. The driver even sat with other drivers in public enlightenment class and receipt was issued as it was always the case.

We discussed those two cases for a long time, and we were always inspired. You can then imagine the reactions of the boys on the road when someone, in an attempt to evade arrest, introduced herself as the wife of Mr. Big Man somewhere. Your guess is as good as mine. That was the spirit. No friend, no foe.

Our being strict also had his consequences as some saw us as being rude, unforgiving and in some cases, “ungodly”; worse more, sometimes we got threatened. But we were resolute as military Generals were arrested accordingly while senior government officials were not spared. One of our officers, Okuleye popularly called “Sankara” once followed up the convoy of the then Military Governor of Ondo State Navy Captain Bamidele Otiko to apprehend him for traffic violation and it made the Punch Newspaper headline. A serving Minister of Information was apprehended for dangerous parking while trying to buy “bush meat ” along Ibadan road. Kayode Fanola, now an Assistant Corps Marshal, ACM once pursued and stopped the then Lagos State Governor, Navy Captain Aigbe on Lagos – Benin Expressway. Gen Abe and Alhaji Shinkafi, the then NSO boss were also apprehended. The FRSC management under Professor Soyinka and Dr. Agunloye would always back us up so long as we were in the right and they were ever ready to defend and fight for us.

My encounter with late Chief Lamidi Adedibu, the strongman of the Ibadan politics and one of his sons, would always ring bell. Chief Adedibu became annoyed and took the case to CID Iyaganku Police Station in Ibadan and Dr Agunloye, then COMACE promptly engaged Barrister Dr Yemi Kayode-Adedeji and Prof Wole Soyinka spoke publicly on the matter. Chief Adedibu, surprisingly had to apologise to me and the then Commander Bisi Kazeem, the current FRSC spokesman, who was my deputy. The Chief then paid appropriate fines, his apologies were taken, and case closed.

God bless all the pioneers of the FRSC for their inspiring and courageous leadership.

How DNA testing may wrongly nail your wife (Part 2)