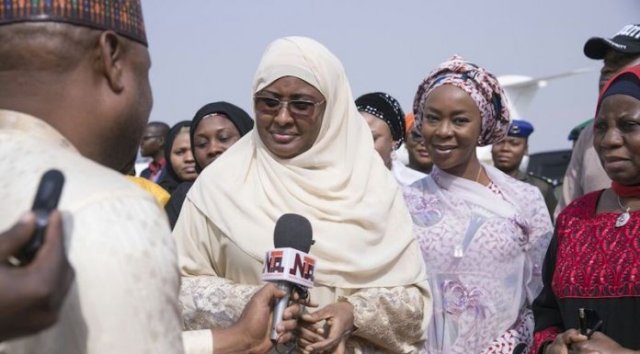 TheCable reports that the president’s wife announced her coming back to Nigeria last night while leaving London arrived at the Nnamdi Azikiwe International Airport, Abuja this morning.

Mrs. Buhari announced her return on her Twitter handle @AishaMBuhari that Mrs. Modupe Oguntade, the wife of Nigeria’s High Commissioner to the United Kingdom, Retired Justice George Oguntade, was seeing her off.

“Wife of the Nigerian Ambassador to the United Kingdom, Mrs. Modupe Oguntade seeing me off. Thank you so much madam,” she tweeted.

It was gathered that she went to the United Kingdom for medical treatment.

It would be recalled that Mrs. Buhari left Nigeria in August for Saudi Arabia for lesser hajj and from Saudi Arabia headed for the United Kingdom.

Her stay in the UK for over two months had generated a range of controversies at home particularly at the height of rumours that President Muhammadu Buhari had planned to marry 44-year old minister of humanitarian affairs and disaster management, Sadiya Umar Farouq last Friday.