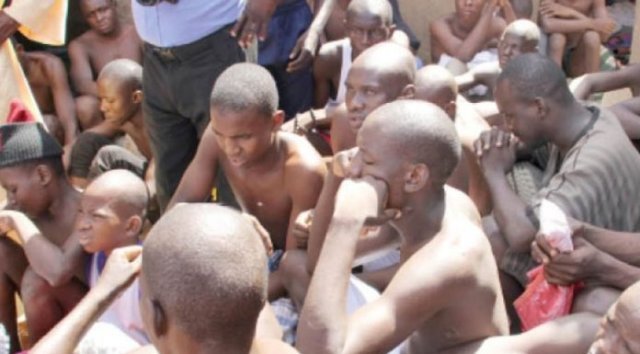 The Kaduna State Police Command, today, raided another rehabilitation centre in Rigasa community on the outskirts of Kaduna metropolis where 147 inmates, mostly in chains, were rescued.

The proprietor of the centre, popularly known as ‘Mallam Niga’s Rehabilitation and Skill Acquisition Centre’, Mr. Lawal Yusuf Muduru, was arrested in the process.

Spokesman for the state police command, Mr. Yakubu Sabo, said in a statement that the action was taken following an unscheduled visit by the state governor, Mallam Nasir el-Rufai to the centre, located at Kwanar Gurguwa in Rigasa on Saturday.

He said the chained inmates were subsequently evacuated and taken to the Hajj Camp in Mando where they were given temporary shelter.

“Today Saturday 19th October, 2019 at about 0800hrs, the Executive Governor of Kaduna State His Excellency Mallam Nasir Ahmad El-Rufai led Police Operatives of the Command to the NIGAS Rehabilitation and Skills Acquisition Centre located at Rigasa Kaduna for an On-the-Spot Assessment where it was discovered that about one hundred and forty seven (147) inmates both male and female were found mostly in shackles (chained).

“During the raid, some of the inmates made certain allegations of maltreatment including sexual molestation particularly by the female inmates against some male inmates.

“Following this discovery, the Governor directed that, all the inmates be evacuated to Hajj Camp located at Mando Kaduna for proper profiling and safe custody.

“Similarly, the Police have arrested one Dr Lawal Yusuf Muduru aka Mallam Niga, the owner of the Centre to investigate him on the said allegations.

“He is currently helping investigation at the State Criminal Investigation and Intelligence Department (SCIID) of the Command.

“The Command is also investigating the authenticity and validity of the registration document the suspect claimed to possess.

“The commissioner of police CP Ali AJI Janga has reiterated his commitment to fight all forms of crime and criminality in the state without fear or favour. He appeals to the general public to continue to support the Command in the current battle against criminality,” said Sabo.

Speaking in the same vein, the state commissioner for human services and social development, Ms. Hafsat Baba, who visited the Hajj Camp to see the victims, said a total of 147 inmates, including 22 females were evacuated from the centre.

She said four of the victims are foreigners from Niger Republic and Cameroon.

“We also have under age among the inmates and those who are mentally not stable. We have contacted a psychiatric doctor who will come to examine them,” she said, adding that efforts were being made to identify their relations.

The inmates were said to have been drug addicts who were taken to the centre for rehabilitation as well as learn some skills.

The commissioner said some of the inmates alleged that they were sexually abused by other inmates at the centre.

Sabo said the proprietor of the centre was being questioned by the police.

It would be recalled that barely three weeks earlier, over 300 children and adults, most of them in dehumanised condition, were rescued in a similar rehabilitation centre in the Rigasa area.

Putin warns of influx of Afghan militants disguised as refugees

Provisions of President Buhari’s Executive Order No 6 of 2018