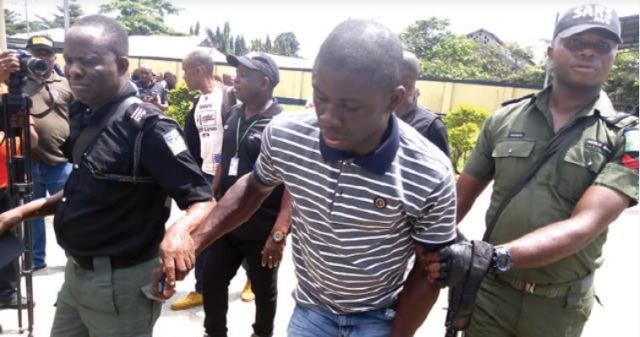 The suspect was taken to the High Court by personnel of Federal Special Anti-Robbery Squad.

West, who confessed to have killed several of his female victims in different hotels was brought into the court premises around 10.28 am by heavily armed personnel of the FSARS.

It was gathered that the charges against him were not read to him because he was not represented by any counsel.

It would be recalled that West was arrested on September 19, along the East-West Road while fleeing to Uyo, Akwa Ibom State.

Speaking after his arrest, he confessed to have killed five women in hotels in Port Harcourt and one each in Ikeja, Lagos and Owerri, Imo State.

“I don’t know what is making me to kill. Immediately the urge comes on me, I kill and after killing, I will start regretting. I even went to Lord Chosen Church, and told the pastor that I have been killing girls in hotels and the pastor said that they have a crusade programme and invited me to see the senior pastor but I waited and couldn’t see him so I left the church and went back and lodged in a hotel. Seriously, I don’t know what makes me to kill, whenever it comes on me that is when I kill, later I regret and feel sober but after, I will still go and kill again.

“When we (he and the girl) go into the hotel, after eating and making love, we sleep. When she is sleeping, I will put the kitchen knife on her neck and ask her not to shout. I told her if she shout I will kill her with the knife. So the girl out of fear will not shout and I will tell her that I will not kill her but she should just cooperate and see what I will do to her, that I will just tie her and keep, and she will cooperate by relaxing. Then I will tear the pillow case and tie her hands and legs, and as I strangle her, she will not have any power to struggle with me.

“While this will be going on, some of them will tell me, what do I want, that they have money in their accounts, I will ask her how much, they will check it before me, when I confirm, I collect the pin number and after the day breaks, when I must have killed them, I will go to ATM and collect the money in the account.

“I will use the money and get other girls. I have killed five girls in Port Harcourt, one in Owerri and one in Lagos. I started the killing in Lagos. That was where I got money because the first girl had N52, 000 in her account. After that I went to Port Harcourt, then Owerri, and returned to Port Harcourt. I met the last girl at a club.

“After that I will collect their phones, and sell at waterline, another at MTN office.”

He said he did not have to use any gun. Instead, he said he used a sharp knife in all his operations.

“When the victim is asleep, I will strangle her. If she wakes up I will use the knife to threaten her not to scream.  I will increase the volume of the television in the room so much that even if she manages to scream, nobody will hear her voice. At that point, I will demand for her ATM pin if she had the card with her,” West confessed.

Wanted: A fresh vision for Nigeria after failed 20-2020

Buhari back to London for medical checkup