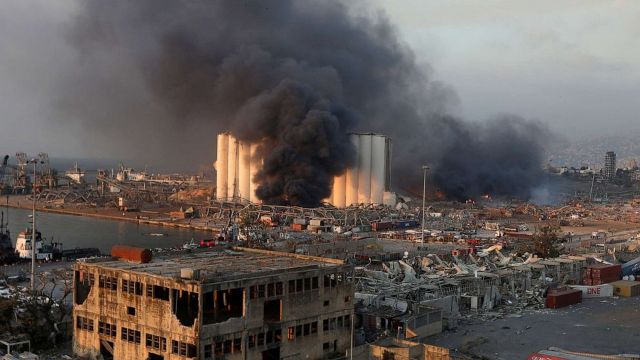 At least 100 people were killed and 4,000 wounded in a massive explosion that shook Beirut yesterday, state-run media reported, citing the Red Cross.

Hundreds have been reported missing in the aftermath of the blast raising fears that the death toll will rise, Lebanon’s health ministry said Wednesday.

Beirut’s governor said the blast caused up to $5 billion worth of damage.

The blast which occurred yesterday was so powerful it could be felt more than 150 miles away in Cyprus.

It levelled whole sections of the city near the port of Beirut, leaving nothing but twisted metal and debris for blocks in Beirut’s downtown business district.

The waterfront neighborhood normally full of restaurants and nightclubs was essentially flattened.

A number of crowded residential neighborhoods in the city’s eastern and predominantly Christian half were also ravaged.

Nearly all the windows along one popular commercial strip had been blown out and the street was littered with glass, rubble and cars that had slammed into each other after the blast. The buildings that remained standing in the blast area looked as if they had been skinned, leaving only hulking skeletons.

With electricity out in most of the city, emergency workers were limited in what they could do until the sun rose.

The United Nations secretary general, António Guterres, has reacted to the development,  according to a CNN report.

In a statement attributed to the Deputy Spokesperson for the secretary general, Farhan Haq, on Tuesday, Guterres expressed his deepest condolences to the families of the victims, as well as to the people and Government of Lebanon, following the horrific explosions in Beirut today.

He also wishes a speedy recovery to the injured, including several United Nations personnel working in Lebanon.

“The United Nations remains committed to supporting Lebanon at this difficult time, and is actively assisting in the response to this incident”, he added.

US President Donald Trump and German Chancellor Angela Merkel who were devastated by the incident have promised to help Lebanon.

“Let me begin by sending America’s deepest sympathies to the people of Lebanon, where reports indicate that many, many people were killed, hundreds more were very badly wounded in a large explosion in Beirut,” Trump said at a press briefing Tuesday evening.

“Our prayers go out to all the victims and their families. The United States ready to assist Lebanon.” said Trump in a White House State address.

According to Ms Merkel’s spokesperson, Ulrike Demmer, the German Chancellor said, “Our thoughts are with those who have lost loved ones. We wish the wounded a speedy recovery. We will offer Lebanon our help.”

Already struggling with an economic collapse, a political crisis and the coronavirus pandemic, many in Lebanon demanded answers to serious questions: why such a dangerous cache of material was allowed to be stored at the port, who knew it was there and why nothing was done to better secure the site?

“As head of the government, I will not relax until we find the responsible party for what happened, hold it accountable and apply the most serious punishments against it,” Prime Minister Hassan Diab said.

Maj. Gen. Abbas Ibrahim, the head of Lebanon’s general security service, told the state-run news agency that “highly explosive materials” had been seized by the government years ago and were stored near the blast site. Although the possibility that the explosives had been intentionally set off was being probed, he warned against getting “ahead of the investigation” and speculating that it was a terrorist act.

The Lebanese Red Cross said that every available ambulance from North Lebanon, Bekaa and South Lebanon was being dispatched to Beirut to help patients and engaged in search-and-rescue operations.

We’ve been unable to stop contract fraud and corruption—Osinbajo