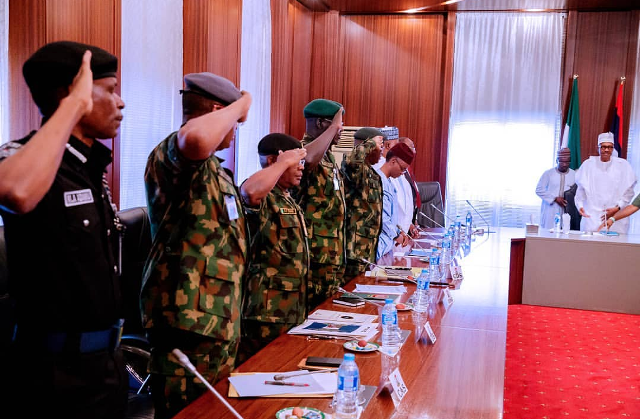 President Muhammadu Buhari yesterday responded to the raging insecurity in many parts of the country by issuing a matching order to the service chiefs to rejig the nation’s security operations.

He said the worsening insecurity in the country will also engage the attention of the 36 states’ governors today (Wednesday, August 5) as they meet to discuss the matter as it affects the states.

“What he said today (yesterday) was virtually a reaffirmation of what he said the first time. Yes, Mr. President said you are doing your best, as far as I’m concerned, but there’s still a lot more to be done. I’m more concerned about the promise we made to the larger Nigerian society and I am ordering an immediate re-engineering of the entire security apparatus. This is something that I believe will be done in a very short time, but I just want us to keep hope alive,” he stated.

According to him, the president ordered the service chiefs and heads of security agencies to overhaul their security strategies, bearing in mind that the federal government owes the citizenry a duty to guarantee lives and property.

Against this background, he urged Nigerians to collaborate with security agencies in the efforts to contain violent crimes, adding that the office of the NSA will work out the blueprint to address the matter.

“The Office of the National Security Adviser in conjunction with other security agencies will work out a blueprint in a short, medium and long term to address this matter.

“Of course, there are also other issues of fully equipping the security agencies.

“Finally, Mr. President has also directed we must rejig our strategy both in terms of operations and intelligence to further prevent catastrophes. We must bear in mind that we owe a duty to the people that elected this government and at the end of the day, without securing the nation, all other things such as revamping the economy and fighting corruption cannot be addressed,” he said.

Monguno, who said he knew how everybody felt about insecurity issues ravaging the country, added that the president also knows that securing the nation is a primary responsibility of the government.

“But again, since he’s not an octopus, since he’s not a spirit, if he delegates to people, then the onus is on them to actually fulfill the legitimate expectations of the larger Nigerian society,” he stated.

Asked on President Buhari’s earlier marching orders to service chiefs to shape up and live up to their task, Monguno said: “basically, these are operational matters that are best dealt with by the Minister of Defense.

“I know that there’s something that he’s working on, which has led to this meeting being delayed slightly, this meeting was actually supposed to take place before the Sallah holiday, but I think one or two things have come up that I don’t think I can explain, but I want you to be comfortable that something is being done, following that marching order”, he said.

On the clash between the governor of Borno State, Prof Babagana Zulum, and the military, the NSA said he would get a better briefing after the meeting of the National Security Council with the Nigerian Governors’ Forum (NGF).

“Just like you have seen things on the social media here, again I don’t know the final details of what happened, but I know that the governor will meet with Mr. President to discuss whatever led to the incident and the debacle. What I know, however, is that in another 30 minutes from now (yesterday), we are going to have a virtual meeting with the Governors’ Forum.

“My name sake has already told me that he’s coming for the meeting, it’s only after that meeting that I can really be able to understand the nitty-gritty of what happened, but like you said, it’s unfortunate and I believe we’ll get over this issue”.

On what the council was doing about the escalated killings in Southern Kaduna, Monguno described the huge level of insecurity in the area as a political matter.

He explained that the governor of Kaduna State, Mr. Nasir el-Rufai, had been discussing with the president over the matter.

But he added that he was not privy to details of the discussion between the governor and the president.

“Kaduna is again a political matter and I think the governor of Kaduna State has been talking with Mr. President and I’m not privy to the final outcome,” he added.

On the security crisis in the northwest, the NSA said findings had shown that illegal miners had been working with bandits to unleash mayhem on the people of the zone, threatening that the security system would get to the root of kidnapping and banditry in the region.

“The second issue, of course, is also tied intrinsically to that situation of banditry in the northwest and north central zones, where you have a lot of illegal aliens working just like what you see in the mining sector, illegal miners working with bandits and kidnappers,” he said.

The NSA said he presented a memorandum of understanding to the council on the twin issues of drug consumption and drug trafficking, which have assumed a dangerous and worrisome dimension.

According to him, the situation is so worrisome because the engagement in drug matters in Nigeria has moved from the hitherto state of being a traffic hub to a production centre.

“These drugs basically are condone, opiums, cocaine, tramadol and pertamines and of course cannabis sativa. The popular drug of choice is tramadol, it is easily acquired. Tramadol has been the drug of choice for terrorists, bandits and kidnappers. And if we don’t tackle this we are going to be immersed great problem by virtue of the fact that he who resides in the town, urban or rural area must be able to collaborate with agents of government in revealing these abnormalities,” he added.

He said between 2011 and 2019, for instance, no fewer than 17 manufacturing laboratories of methamphetamine were discovered and destroyed, identifying promoters of the menace as some drug farmers who planted cannabis and employ militants to protect the farms.

The NSA said the Chairman of the National Drug Law Enforcement Agency (NDLEA), Col. Muhammad Abdallah, was invited to brief the meeting on the situation.

He explained that the NDLEA boss affirmed the increasing trend of drug trafficking and consumption.

According to him, the NDLEA boss described the situation as reckless, adding that it requires collective efforts to address the menace through the deployment of both the entire societal and governmental approach to curb it.

He classified those involved in the menace into three- drug peddlers, drug consumers and some security agents or government officials entrusted with the responsibility of denying people access to the substance but opt to compromise their duties and rather promote it.

However, the NSA said the council had decided that it was high time the menace was fought because it had been a factor fuelling criminality such as banditry, kidnapping and terrorism.

He added that given the level of abnormality and inhumanity involved in killing and wasting lives, only people who consume drugs could engage in such mindless acts.

“You have a minimum of three parties operating at the same time – the drug peddler (the supper fly), the consumer (the junkie) and that person in the centre who has been entrusted with denying these drugs access into the country. It is important to note that if there is a compromise then things become tedious and problematic.

“So, what we did was to invite the Chairman of NDLEA based on his report that all security agencies are studying, the president has resolved that we must wrestle this problem. This problem is directly linked.

“If you look at the criminality, the colouration of each crime, especially kidnapping, banditry and terrorism, it is not the killing of the people but the way people are killed, goes to show one thing. It is extremely abnormal, inhuman and these acts can only be perpetrated by people who are out of their minds.

“One thing we in the security and intelligence arm have been able to trace, is that there are certain drugs of choice that have saturated the entire landscape of the country,” he said.

UNHCR raises concern about 3.7m out of school children

Twins whose parents were childless for 12 years abducted