Home OPINION The king and his sceptre 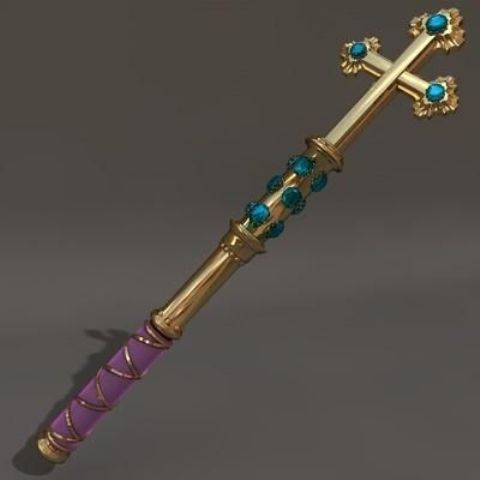 To wield the sceptre is not just to hold the physical object called “sceptre”, which could be made of gold, silver of even wood, for that matter. It is in the exercise of the powers, duties and responsibilities which inhere in the Calling to be the Standard Bearer for a people that the wielding of the sceptre lies for every true King. Thus, to merely hold the physical symbol of a sceptre, or to even wave it at people and generally play with it, is not enough. Once the defining essence of this essentially ethereal fundament of societal beacon is either outsourced or simply neglected, it can be safely said that the King is not on the job. That seems to be our national problem at the moment, if the epidemic of serial controversies and conflicts between different principal officers, serving officials and party big wigs of the current federal government is anything to go by. Which brings to mind a strange dream by a certain Obidike about the land of Alaoma and its king, many years ago.

Obidike found himself looking down at Alaoma community and admiring its beauty in his dream. He saw many titled men and elders heading in a particular direction, apparently going for some meeting, or gathering. Their carriage and quiet dignity, as individual elders, was impressive. Such bearing! Such poise! Such character! These were the living symbols of the traditions, the laws, the values and pristine wisdom of the land.

These were the people’s Sentries in matters of right and wrong. Anon, Obidike also saw some women, maidens, young men and children. They all looked diligent, intelligent and alert in a simple and yet dignified sort of way. “Alaoma is truly blessed” Obidike thought to himself, as he smiled and took in everything with calm scrutiny. No wonder neighbouring communities admired and respected the land and its people! No wonder they saw Alaoma as proof that it is human beings that made a community good or bad.

Yes, we do not say that a community is good or bad, simply because of its farmlands and other natural endowments. Tall trees, fertile land, elaborate public ceremonies and pleasant weather cannot create a good human community. Instead, it is the human beings themselves, their way of doing things and their sense of propriety, not what is in the soil or above the soil, that make a society good or bad. That is why it takes responsible leadership, stakeholders with the requisite sense of social responsibility, under a King who knows the true spiritual and symbolic significance of the Sceptre, for any community or society to be on the right footing. The King thus becomes the representative of the ineffable. His sceptre is then his staff of office, as well as the symbol of his authority.

As Obidike was thinking about all this, another profile of the same Alaoma came into his line of vision; without warning. He shuddered. How could this be? The tall trees were still there. The fertile soil had not become any less fertile. The lush vegetation still blossomed with characteristic luxuriance. The ever-benevolent and peaceful sky that gave Alaoma its welcoming cool air were still there. Yet he could sense that something was wrong. What was it? He could not put his finger on anything. Then he felt, or heard, a voice whisper to him that Alaoma’s problemstemmed from the leadership style of its King. He turned, looked around, but could not see who whispered to him. Then his mind went to the well-known fact that their King had more or less abdicated all kingly responsibilities. Yes!

No one knew exactly whom to blame for the problems of the now-sick land. The young ones blamed the elders and titled men. The elders and titled men blamed the clan heads, saying that it was their duty to advise and restrain the king. But the clan heads said it was the fault of the kingmakers who made a wrong choice. Not to be outdone, the kingmakers themselves said it was the fault of the King himself, who would not listen to anyone; or take charge as a true King. Misery, despondency and weariness of the spirit soaked the land through and through. It was horrible!

Obidike found himself wondering why the people would not speak to the King. Then, as if in response to his thoughts, the strange voice whispered to him again: “The King does not listen to, or hear, anyone. He has abandoned the task of being father and guide to all. His real authority stands outsourced to persons of questionable goodwill. Custodianship of the realm no longer resides with him. He has no idea what is going on anywhere, anymore. Being totally beholden to his ways, and leaning perhaps too much towards excessive self-indulgence, he does not now see clearly, think clearly, or know what well-meaning people thought, or felt.”

Looking around and still not seeing whoever was whispering to him, Obidike was at least relieved that he now had some kind of explanation for the subsisting smell of sacrilege in the air. But does that explain the ominous silence of some of the wise men in the community? Not quite! His unease returned.

Obidikes’ queries were: (1) How could a King possibly sleep well at night, while an Odour of Un-sanctity walked the lands? (2) Does a King need to be told that a sharp object, which is used for trimming the fingernails, is not good for cleaning the eyes? (3) Does a King need to be reminded that no sensible person invites the community to inspect every part of his body in the village square, just to prove that he baths with extreme care? (4) Does a King need a soothsayer to learn that a King is, first and foremost, a King? (5) Who would be King, if presumed royalty is always punctual at a drunken revel? (6) Who would be King when the royal jewels suffer common access and base display? (7) What should the wise elders do when what should be hidden from children is put on display in the marketplace? (8) Who will give the people a sense of the sacred when the officiating priest at a coronation ceremony is not sober?

Many more questions flooded Obidike’s mind. But they were just too many for him to take on at once. Obidike was at his wits end. He thought of the saying that the friends and relations of a mad man do not find his behaviour in public amusing, or entertaining. Then he thought of the proverb, which said that whoever revealed the identity of the person behind a mask had profaned the mystery of the masquerade cult. But, and here is the snag in this case: The very custodian of all the mysteries and values of the land would seem to have put his imprimatur of profanity on everything. When the sublime stands diminished by its supposed sword bearer and agent, when the protector of the realm has become the Patron Saint of mediocrity, when the inspiration behind the general profanation of the mysteries comes from the supposed custodians, all the people can say is “Chai!

Then Obidike adverted his mind to the reason why most of Alaoma’s elders and titled men appeared to no longer advise, or admonish, the King. Some who tried in the past simply got tired and gave up. Others lost their voice, while a few became worried that they might even lose their lives in controversial circumstances. Among those who lost their voices, were those who were simply avoided by the King. Others were denied access by those who had cordoned off the King. But many more had their voices strangulated by the favours they had received, and continued to receive, from the King and from those who had confiscated his powers. This latter group of voiceless elders and titled men cannot speak, because they do not want to lose the advantages and privileges they are enjoying. In sum, majority of the people, titled or not, who were now acting dumb certainly had very good reasons for doing so.

Then Obidike, still in his dream, suddenly found himself looking at the crowded Village Square. It was a festive occasion. An old man in the crowd was looking around expectantly in the bustling village square. This particular old man always kept vigil at the village square during every communal emergency. He would come each time, stay at his vantage position and watch. He had only one reason for coming: to see if the King had changed for the better; to see if he could demonstrate any real sign of control and leadership. But, occasion after occasion, the King would come to the Village Square and go; as uninspiring as ever. Then the old man would leave, shaking his head and noting the disgust on many faces. He also would observe the sycophantically pasted smiles on some other faces.

The smiling ones were usually those responsible for, and benefitting from, the rot in the land. It was such a pity! The more communal crises elicited nothing more than plaintive lamentations from the King, the more the old man was confounded. Must all the people perish? He often wondered. Unable to make sense of it all, he sat back after one of his many trips to the village square to reflect. Then it hit him: The King does not have enough people of genuine societal goodwill around him. He, too, is content to make empty statements and take that for the exercise of leadership authority. Yes, he points to the sceptre, insists on its pristine ontological primacy, but does not come anywhere near exercising its powers. Scary, is it not: That a society can be so asleep, sitting on a keg of gun powder?

Obidike resolved to speak to the King, no matter what. Then he woke up, sweating profusely.

Shut up, you are a compound idiot and bastard

#EndSARS killings and report: The challenge of institutional dishonesty and impunity...