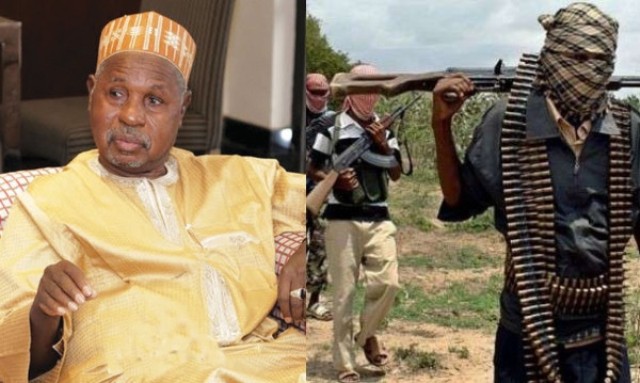 I have a soft spot for Governor Aminu Bello Masari of Katsina State and take serious what he says even when events dictate otherwise. This may stem from my meeting him in 2007 shortly after his tenure as Speaker of the House of Representatives. He had visited us at the Labour House, Abuja. He was simple, soft spoken and logical. I thought the country needed leaders who are intelligent and have a sense of responsibility and patriotism.

I monitored his attempts to be Katsina State governor until his eventual victory in 2015. I told myself the state was being twice lucky after having Umaru Musa Yar’Adua (later President) as governor.

Perhaps what has tested the leadership of Masari most is the challenge of bandits who occupy large parts of the state and run their own government.

Banditry in the North West and the Boko Haram disturbance in the North East are two of the most serious challenges threatening the very existence of the country. So you can imagine how happy I was when Masari, who is also the chief security officer of the state, announced that he had uncovered the sponsors of these criminal gangs.

He revealed that: “Most of the bandits and Boko Haram attacks facing the Northern part of the country are sponsored by some politicians who are enemies of the present APC government at both federal and state.”

It was not just a blanket statement as he went on to identify them: “Today, politicians who are willing or intending to contest 2023 elections are sponsoring banditry because the way the bandits mastered how to operate guns and by how they specialised in ambushing soldiers, we should know that there is someone behind it.”

Of course we knew all along that the sponsors were humans, not ghosts. I knew the governor could not publicly name the sponsors, but expected him to hand over the list to the security services.

Given the seriousness of the security situation with the Boko Haram getting bolder to the extent of allegedly attacking the well-armed convoy of a sitting governor, I thought the country, within days, would have been informed of the arrest of the identified politicians who Masari claims intend to contest the 2023 state and federal elections.

Shockingly, no such thing happened. In fact, when the governor appeared in public on Thursday, August 15, 2020, he said nothing about his claims. Rather, he had a new tale to tell: he blamed the service chiefs for the banditry.

What is becoming clearer to me is that Masari had no evidence when he made claims that he had identified the sponsors of banditry and terrorism. He seemed to have been playing politics with the lives of the hapless citizens he was elected to govern. In truth, the governor’s unravelling is not sudden.

He has demonstrated, in the last four years, a shocking inability to comprehend the banditry issue, understand or analyse the bandits or work out a solution. In addressing the issue, Masari had taken off on the wrong route by believing that the best strategy was to negotiate with the bandits and buy peace, as if it is a commodity he could purchase from street hawkers.

Initially from 2016, he ran a two-year amnesty programme for the bandits who were said to have surrendered over 400 AK 47 guns and other assorted arms, and returned over 36,000 cows, donkeys, camels and horses.

Then he went into full negotiations with them and in September 2019, announced a major break-through: “The negotiation is yielding results. Now I can say over 80 per cent of people under captivity in Katsina State have been released. So, in terms of group kidnapping I can only remember that right now (we have) only 13 people that we are searching for.

“We have only 13 people. But in terms of massive attacks since we started, there was no single massive attack on any village or any community. By my account, about 57 people have been released by them, most of them women and young children. Among them even are nationals of Niger Republic.”

The governor was ecstatic; he believed the bandits had become born again and thought the end of banditry had come. He told the Katsina people that the negotiations had brought relative peace, adding: “The next step is the issue of disarming the bandits and commanders in the forest that command 200, 300, 400 fighters, fully armed on motorbikes.”

Masari vouched for the bandits. He claimed they are ready to disarm but: “… the first stage is about the release of some of them that were not even convicted or even charged to court and by the time they release all those people under their captivity, we will start reconciliation between them and their neighbours.

“What neigbours? How could he think that there would be communities of outlaws, kidnappers and armed robbers who will live side by side with their victims as good neigbours?

He also talked about disarming the bandits in the forest because “…if they keep the guns and other ammunition with them, they’ll eventually fight among themselves.”

He cried: “They could not honour the agreement, they betrayed us.”

But how could a former number four man in the country and a governor, believe bandits are honourable people who will not betray him?

He wailed: “We choose to sign peace agreement with the bandits so as to avoid loss of lives and properties, but it didn’t yield a positive result. This time around we will hand it over to security personnel.

“In our effort to honour the agreement between us, we cancelled all vigilantes and volunteer groups and we allowed them (bandits) to continue with their normal activities in the state.” Pray, what can be the “normal activities” of bandits but banditry?

He lamented: “In the forest, a lion or tiger kills only when it is hungry and it doesn’t kill all animals; it only kills the one it can eat at a time…How can a human being behave the way an animal cannot behave.” Governor Masari then begged the Katsina people to forgive him since he had failed in his primary duty to protect them.

However, with no new initiative or excuse for the increased banditry, but insisting on staying in power and enjoying the perks of office, the respected governor apparently cooked up the story of opposition politicians sponsoring the terrorists and bandits. If my assertion is not true, I challenge His Excellency Aminu Bello Masari to publicly name these imaginary politicians.

Buhari, Osinbajo, others may take COVID-19 vaccine on live TV –...

Nigeria Air doomed from the start

The diabolical silence of the Igbo elite