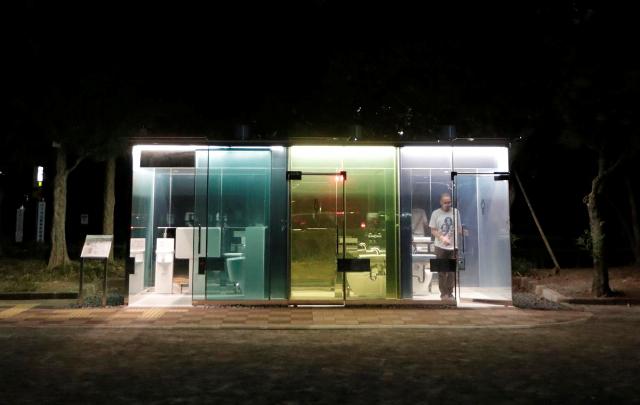 Now you see them, now you don’t.

The walls of two newly installed public toilets in Tokyo’s Shibuya neighbourhood are see-through before people enter, but turn opaque when the doors are closed and locked from the inside.

The so-called transparent toilets, which opened this month, were designed by award-winning Japanese architect Shigeru Ban for a project organized by The Nippon Foundation that redesigned a total of 17 public toilets in the neighbourhood. The goal was to make them accessible to anyone, regardless of gender, age or disability. The see-through walls glow in vibrant colours — green, yellow, orange.

“Maybe I feel a little anxious the first time, like will this work? Is somebody (outside) the glass trying to look inside or something?” Cecilia Lopez, a travel blogger from Argentina, said Thursday. “But I think it’s more for the fun of it.”

The outer walls of the toilets have a layer of glass that remains clear when hooked up to an electric current.

When the door is locked, the current is cut and a special film makes the glass opaque and conceals the users, according to Kana Saji of The Nippon Foundation.

The foundation says it aims to achieve a society in which all people help one another. “It’s really clean, and it sort of looks like art,” said Tomoko Mizutani, a Tokyo resident who was taking a photo of the toilet.