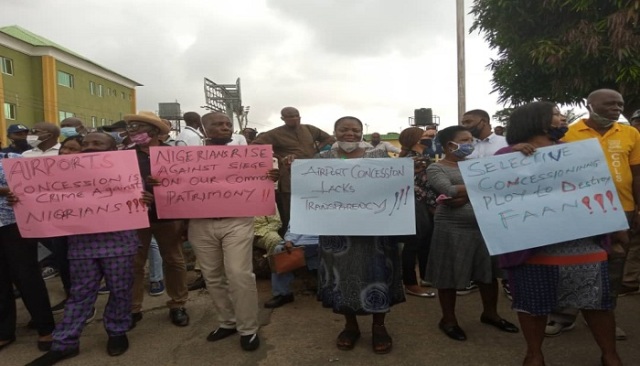 The protest march took place simultaneously in all the airports nationwide.

The unions which also protested against non-payment of retirement benefits and pension to some of their colleagues who were disengaged from service carried placards which bore inscriptions such as ‘Concession of airports lack transparency’ ‘Pay our pension now’ ‘Resolve MMA2 concession problem now’ and several others.

The unionists congregated at Freedom Square on the premises of the Federal Airports Authority of Nigeria (FAAN) and moved from there in a caravan to the general aviation terminal and Murtala Muhammed Airport 2 Terminal at the domestic wing of the airport before hitting the road to the international wing of the airport.

Addressing the workers, the general secretary of ANAP, Mr. Abdulrazak Saidu slammed the minister of aviation, Mr. Hadi Sirika for the opaque manner he has conducted the concession programme.

“We shall never rest until the government and aviation minister listen to our demands.

“We have written series of letters to the minister expressing our reservation about the way he is going about the planned concession.

“You cannot be talking about concession when the one earlier concessioned is still a subject of dispute in court,” he said.

In Ilorin, the unions took their protest to the Ilorin International Airport where they stated that the previous concessions were yet to yield.

Addressing the workers, chairman of ANAP, Ilorin Airport Branch, Mr. Sunday Ugbeikwu said the concession was unacceptable adding that it would lead to job loss.

“The federal government in conjunction with minister of aviation wants to concession our airports and we are saying NO; they cannot concession our patrimony, we inherited it, and it is not in our watch it will happen.”

“They said they want to draft our pensioners into PENCOM; for your information, FAAN is owing PENCOM about N85 billion. If they do not clear those debts, they are mortgaging our destiny,” he expressed.

Also speaking, the secretary of NUATE, Mr. Abdulazeez Sanni, stressed that the move to single out the commercially viable airports for concession will lead to job loss.

“We have 22 airports in the country, 4 are viable, most especially Lagos. Now they want to single out the viable ones and concession them, when the private sector takes over the airports that generate money and is now in the hands of concessionaires, where will they get money to pay staff?

“If these four have been taken over, who takes care of the remaining airports, who will pay salary? How is it possible that people will not lose their jobs?

“These are the things we want the whole world to know and to look into it. If you want to concession, there are options,” he urged.

For its part, the Nigeria Labour Congress described as “alarming” the planned concession of the airports.

In a statement by its president, Mr. Ayuba Wabba, the NLC said the concession drive of the present government “has been part of the neo-liberal predilection of successive governments stretching from the days of military rule up till the current democratic dispensation to privatise, deregulate, and concession critical national assets to their cronies and friends.”

He described such approach to governance as “reactionary predatory and self-serving.”

He said “the unwholesome and unpatriotic attitude of giving away our prized national property to private sector operatives is not only unjust and immoral but also in ultra-violation of Chapter 2, Section 16 of the 1999 Constitution of the Federal Republic of Nigeria on the Fundamental Objectives and the Directive Principles of State Policy which states that the Nigerian government must manage and operate the major sectors of the economy and ensure that that our economy is not operated to permit the concentration of wealth or the means of production and exchange in the hands of few individuals or of a group.”

Continuing, he said: “It is important to note that while our airports especially the ones earmarked for concession were in states of eye sore and dilapidation, no private sector invested money towards its rehabilitation. It would be a grand insult to the collective intelligence of the Nigerian public for the federal government to invest a lot of public funds into the reconstruction and rehabilitation of our airports and then hand them over to private sector players for profit maximization and at the expense of the tax-paying public. This is unjust. It is immoral. This cannot stand.

“Apart from the hemorrhage to government revenue that this concession portends, Nigerian workers are concerned over the security of their jobs. Our experience in the past has been that of massive layoff of workers once private sectors gets the concession on our national assets. The reason is very overt – profit maximization as very few workers are engaged in slave labour to do the work that many workers would ordinarily be required to do. Organised Labour would resist this. (Sic)

“As far as we are concerned, there is no compelling reason for the federal government to gift away our national airports to private companies to manage. The truth is that this presents the government as being incapable of managing anything. We are sure that no responsible government would want to be seen in that light. The failures of private sector intervention in our public electric power supply speaks volumes of the inherent danger in using public assets to service private interests or massage the ego of those in the corridors of power.

“The truth remains that once public workers are properly motivated, trained, capacitated, and given the enabling work environment, there is no limits to what they can achieve. Furthermore, once government is committed to allowing the professionals do their job without undue interference and ensure optimum maintenance standards especially by enforcing standards in the public procurement process, our workers are more than capable to maintain and manage our national assets. The success story of the Ethiopian Airline and the Airport hub instructs.

“The NLC and organised labour in Nigeria warns the federal government to desist from further contemplation, discussions and arrangements to concession our international airports. We call for social dialogue between government and labour on this.

“Organised labour and the entire Nigerian working class would resist any attempt to unilaterally concession any of our public airports thus undermine the directive principles and fundamental objectives of our national constitution which is actually the fulcrum upon which our collective identity and aspiration rests.

“We will not give up or surrender public assets to a few well-connected Nigerians, regardless of how powerful they may think they are.”