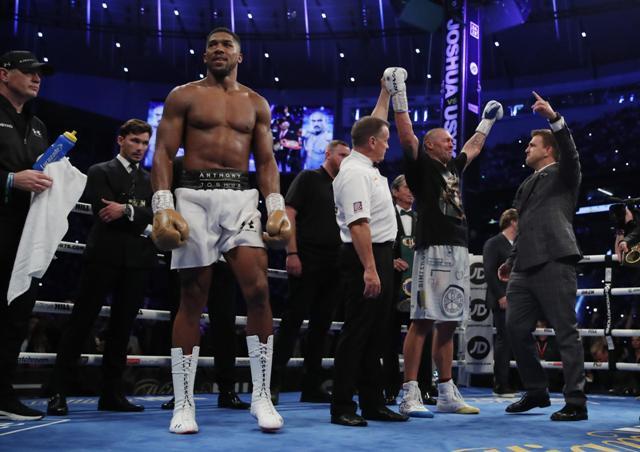 Oleksandr Usyk ended Anthony Joshua’s reign as world heavyweight champion with a unanimous points decision win to claim the WBA (Super), IBF, WBO, and IBO titles in front of 68,000 fans at the Tottenham Hotspur Stadium in London on Saturday.

The Ukrainian triumphed 117-112, 116-112 and 115-113 on the scorecards of the three judges in just the former undisputed cruiser-weight world champion’s third bout as a heavyweight.

His victory, which extended Usyk’s perfect record as a professional to 19 wins from as many bouts, scuppered immediate plans for Joshua to fight fellow British world champion, Tyson Fury, in a heavyweight unification bout.

Usyk’s victory saw him become just the third boxer after Evander Holyfield of the United States and Britain’s David Haye to win both the cruiserweight and heavyweight world titles.

Joshua has left the ring, clearly disappointed, while Usyk celebrates with the titles.

Reacting to the victory, the new heavyweight champion Usyk said, “This means a lot for me. The fight went the way I expected it to go. There were moments when Anthony pushed me hard but it was nothing special.

“I had no objective to knock him out because my corner pushed me not to do that. In the beginning, I tried to hit him hard, but then I stuck to my job.

“The only thing I wanted to do with this fight is to give praise to Jesus Christ.

“I have been working so hard since January in preparation for this fight, it took me half a year and I didn’t see my family for so long. I missed seeing them playing. I want to go home and be happy with my family and I’m not thinking about the rematch.”

The blood of Deborah cries for justice