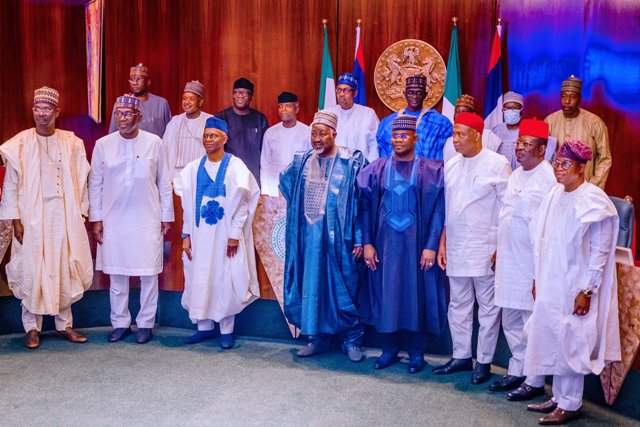 State governors elected on the platform of the All Progressives Congress (APC) are in a quandary about which of the two presidential aspirants – Bola Tinubu and the vice president, Prof Yemi Osinbajo – to support as the battle for the party’s 2023 presidential ticket gathers momentum.

Although Tinubu is yet to officially declare for the office, he had in January informed President Muhammadu Buhari of his intention to succeed him and has since been traversing the length and breadth of Nigeria for both open and behind-the-scene consultations.

However, on Monday, April 11, Osinbajo who was ‘donated’ by Tinubu to serve as an auxiliary to President Muhammadu Buhari in 2015, officially declared his interest in the presidency after his boss’s exit on May 29, 2023.

The 65-year-old Redeemed Christian Church of God (RCCG) pastor made the declaration in a short broadcast shared via his Twitter handle after many months after his supporters had embarked on below-the-line electioneering.

“I am today, with utmost humility formally declaring my intention to run for the office of the President of the Federal Republic of Nigeria on the platform of All Progressives Congress,” he said.

Later in a speech entitled ‘Why I am running for president’ released by his media office, Osinbajo said he had the requisite knowledge and experience to run the affairs of Nigeria having served as Buhari’s deputy for seven years, so far.

He said if given the opportunity he would radically transform Nigeria’s security and intelligence architecture; complete the reform of the justice system focusing on adequate remuneration and welfare of judicial personnel, ensure justice for all and the observance of rule of law, rapidly advance infrastructure development, especially power, roads, railways and broadband connectivity, Provide an excellent environment for businesses to thrive; take the agriculture revolution to the next level especially mechanisation as well as develop the farm to table value chain.

Besides, he said his administration would make sure the government, its agencies and regulators serve the business community, create a tech economy that will provide jobs for millions, enhance the social investment programmes to a full-scale social welfare scheme and lift 100 million Nigerians out of poverty within this decade.

Other promises include “completing the task of ensuring that all Nigerians, male and female, attend school, reforming our educational system for relevance to the challenges of this century, completing the task of universal health coverage for all and strengthening the capacity of States and Local Governments to deliver on their respective mandates.”

Prior to the official declaration, Osinbajo had on Sunday, April 10, chose the occasion of Iftar (the break of fast during Ramadan) to inform the APC governors of his plan to join the 2023 presidential race.

He boasted about his capacity and experience having been vice president for about seven years.

He said he had consulted widely adding that having informed Buhari, he felt the governors were the people to inform next.

About 10 APC governors led by chairman of the Progressives Governors’ Forum (PGF) and governor of Kebbi State, Mr. Atiku Bagudu, attended the meeting.

Bagudu, who responded on behalf of the governors, reportedly said the APC governors were looking forward to the party continuing to be in power after the 2023 election.

Shortly after Osinbajo’s declaration on Monday, Tinubu met with the APC governors in Abuja to seek their support.

The meeting which took place at the Kebbi State Governor’s Lodge, Asokoro, Abuja, had 12 state chief executives in attendance.

Addressing newsmen after the meeting, Tinubu said his meeting with PGF was to seek their support for his presidential ambition.

“My mission here is to seek collaboration, support and encouragement of my party, the APC, for my ambition to become the President of the Federal Republic of Nigeria to succeed President Muhammadu Buhari after his tenure.”

When he was asked about the presidential ambition of his political godson, Osinbajo, he replied: “I don’t have any son grown up enough to make such a declaration.”

Speaking with journalists thereafter, Bagudu, said Tinubu sought the support of the forum in actualising his presidential ambition.

“Asiwaju Bola Ahmed Tinubu, this morning, met members of the Progressive Governors Forum where he stated what he has made public already – his intention to seek for the office of the president come 2023 which he has already announced publicly. He briefed us on his reasons, his thinking and his message.

“We appreciated him, and his message and will discuss the message at one of our forum meetings,” he said.

He refuted the notion that Osinbajo’s declaration would pit him against his political godfather, Tinubu.

Instead, he said their aspirations have further thrown up APC as the choice party with an array of capable hands showing interest to lead the country.

He added that the development shows the quality of persons in the ruling APC.

“We have many brilliant people in our party, some serving and some not serving. The fact that we have people in our party that express desire to lead the party into the highest office in electoral contest shows how much this our party has resonated with Nigerians and our party members.

“We appreciate our party because it has become a party that has endeared itself to Nigerians.

“For us, it is a hallmark of success that people are showing interest but at the end of the day and because they are leaders of the party, they will always put the party’s interest at heart.”

Buhari beating the drum for Osinbajo

Many are of the view that Osinbajo’s declaration has the president’s blessing.

It is also believed that Buhari’s endorsement of Osinbajo has sealed Tinubu’s hope of being the landlord of Aso Villa.

NewsGazette learn that Osinbajo was ab initio hard put to making the declaration but he caved in when he was told to either accept the offer or it would be given to a young Turk from the south westerner.

Tinubu’s camp goes for the kill

Following Osinbajo’s presidential declaration, Tinubu’s camp has been on edge, resorting to name-calling, for want of how best to respond to the development.

To them, Osinbajo has betrayed his political godfather, Tinubu the same way Judas Iscariot betrayed his master, Jesus Christ adding that the fact that the betrayal took place few days before Good Friday was not coincidental.

Punch quoted the national president, Asiwaju Women Cooperative Society of Nigeria, Ms. Toyin Badmus, in a Facebook post, as describing Osinbajo’s declaration as the “re-enactment of Awolowo Vs Akintola in the old Western Region,” adding “The traitor always loses…. Yemi is the traitor.”

Aide to the governor of Lagos State on drainage and former spokesman for APC in Lagos, Mr. Joe Igbokwe also took to his facebook page saying it is wrong for those who were fed by Tinubu to bite his (Tinubu’s) finger.

“If you are one of the people Asiwaju raised up and you are eyeing the presidency of the Federal Republic of Nigeria, show respect and withdraw from the race,” he wrote.

Spokesman for the APC in Lagos, Mr. Seye Oladejo has also called to question the vice president’s electoral value.

He recalled how Osinbajo lost his polling unit to the Peoples Democratic Party (PDP) in the last Presidential election in 2019.

“The only demand is for us to go to the primary. Let us see how much support Osinbajo can garner from the party members. This is someone who could not even win his polling booth.

“I am not aware of any change in political relevance and popularity since the last elections. I want to congratulate him for finally summoning the courage to throw his hat to the ring,” he said.

Meanwhile, the Osinbajo Support Movement (OSM) has called on Tinubu to support his political godson.

The convener and national coordinator for the Group, Mr. Olawale Badmus, said the OSM will continue to propagate the good work of the vice president and ensure that he emerges as the APC flag-bearer for the 2023 Presidential elections.

“We are out to propagate and ensure we put out the good work of the vice president and also to propel him to run for the office of the president come 2023.

“We will also do our best in ensuring he secures the ticket of our party and coast to victory come next year,” he said.

The coordinator said Osinbajo had worked well with Tinubu while he served as the governor of Lagos State and also done excellently well as vice president to Buhari.

“The Osinbajo that we know has been instrumental to the success story of Asiwaju Ahmed Bola Tinubu in Lagos State government.

“He served well as a commissioner of justice in Tinubu administration of Lagos State and for Tinubu alongside many others to have jointly nominated him as a running mate to Buhari was a glory to Asiwaju himself.

“Also, for him to have continually told us that Osinbajo is the best product that can be put forward alongside President Muhammadu Buhari, we have accepted that product after testing him at the federal level and we can easily put our trust in him,” Badmus stated.

“Asiwaju is a great leader of our party and his role in bringing about an Osinbajo vice-presidency has been vindicated, having performed creditably, impressing President Buhari and millions of Nigerians.

“As a leader, when you have brought a great idea, you should allow such to grow and Vice-President Osinbajo’s declaration for the 2023 presidency is a reflection of very sound growth and the next step is for Osinbajo to assume the presidency in 2023.

“I have been in politics since the early 80s and I can tell you that the Nigerian electorate is now much wiser, much more discerning and sophisticated than what you had in the past.

“The spontaneous rallies are a show of strength, asserting the power of the real people and it is a strong pointer to Professor Yemi Osinbajo’s very bright chances for ultimate electoral victory,” he said.

A legal practitioner, Mr. Kayode Ajulo, said in a television interview that Tinubu’s interest in the presidency is different from Osinbajo’s.

He said Osinbajo’s ambition is about service, while Tinubu’s is personal.

Like Aji, the National Coalition Group for Prof. Yemi Osinbajo called on Tinubu to endorse Osinbajo, adding that Aso Rock is not a retirement home for the aged.

“We only have one leader in APC in the person of Muhammadu Buhari. Tinubu is only an aspirant. When you give birth to a child in African culture, it is your prayer that your child will be greater than you. We urge Tinubu to anoint his son so that we can have fresh air,” the national secretary of NCG, Dr Eli Dibia, said at a press conference in Abuja.

Pilots, engineers shouldn’t restrict themselves to flying or repairing aircraft –...