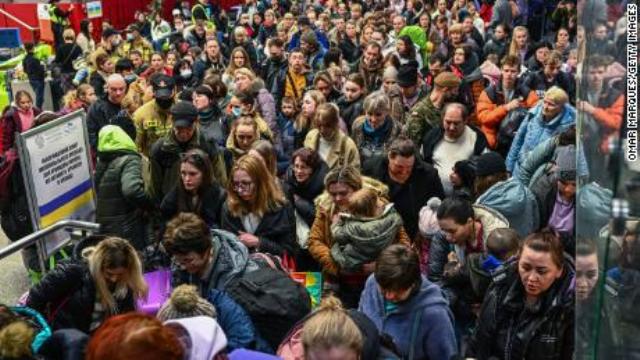 “Eight weeks into the conflict, we are at five million and counting, with five million unique stories of loss and trauma,” said deputy UNHCR chief Kelly T. Clements.

The UN’s International Organization for Migration (IOM) says more than 218,000 third-country nationals — largely students and migrant workers — have also escaped to neighbouring countries, meaning more than 5.25 million people in all have fled Ukraine since the war began.

Women and children account for 90 percent of those who fled, with men aged 18 to 60 eligible for military call-up and unable to leave.

Nearly two-thirds of all Ukrainian children have been forced from their homes, including those still inside the country.

“While the sheer scale and speed of displacement is immense, we must not lose sight of what these figures mean,” Clements told the UN Security Council from Hungary on Tuesday.

“Women, children, and the aged, have left their homes, their lives, their sons, their fathers and husbands.

“Each one of the millions of displaced are forced to make impossible, heartbreaking decisions and have left everything, almost everything, they hold dear.”

More than 2.8 million Ukrainian refugees have fled to Poland. Three-quarters of a million have reached Romania.

Clements paid tribute to the humanity shown towards refugees in host countries, with communities and individuals rallying to provide food, shelter, medicine and transportation.

“This inspiring response is surpassed only by the strength and composure of refugees themselves, who continue to exude both courage and resilience,” she said.

UNHCR figures show nearly 645,000 Ukrainians fled in February, with nearly 3.4 million doing so in March and just shy of a million leaving so far this month.

Beyond the refugees, the IOM estimates 7.1 million people are displaced within in Ukraine.

Before the invasion, Ukraine had a population of 37 million in the regions under government control, excluding Russia-annexed Crimea and the pro-Russian separatist-controlled regions in the east.

IOM chief Antonio Vitorino warned that more people were expected to flee their homes as the war carries on.

“We remain deeply concerned about the continued deterioration of the humanitarian situation in Ukraine as we anticipate an increase in displacements, internal as well as external,” he told the Security Council.

Vitorino said that in mass displacement situations, up to 30 percent of the population could be expected to experience some form of negative psychological impact and mental health problems.

“However, as the war continues and intensifies, psychosocial needs will undoubtedly further increase,” he said.

“We remain particularly concerned about the situation of women and children who have fled Ukraine or who are internally displaced,” Vitorino added.

“Trafficking in persons was, unfortunately, a known phenomenon in the region, and as observed in past crises, large-scale displacement, family separation, and disruption of civil protection and community networks render populations vulnerable to violence, exploitation, and abuse.”

Adoke and the burden of memory

No one can defeat me –Buhari

One third of Africa will be vaccinated this year – WHO