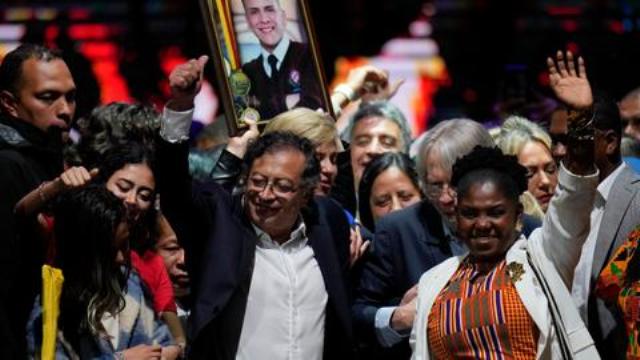 Ex-guerrilla and former mayor Gustavo Petro will be sworn in Sunday as Colombia’s first-ever leftist president, with plans for profound reforms in a country beset by economic inequality and drug violence.

The former senator, 62, takes over from the deeply unpopular Ivan Duque for a four-year term during which he will enjoy support from a left-leaning majority in Congress.

Petro’s hard-fought victory in June elections brought Colombia, long ruled by a conservative elite, into an expanding left-wing fold in Latin America that could be consolidated in October with a likely victory for Luiz Inacio Lula da Silva in Brazil.

At a ceremony in Bogota on the eve of his inauguration, Petro said his government would aim to “bring to Colombia what it has not had for centuries, which is tranquility and peace.”

“Here begins a government that will fight for environmental justice,” he added.

On the campaign trail, Petro had promised to raise taxes on the rich, invest in health care and education, and reform the police after a brutal crackdown on anti-inequality protests last year that was internationally condemned.

He has vowed to suspend oil exploration, to promote clean energy and to reactivate diplomatic and commercial relations with the government of Nicolas Maduro in Venezuela, suspended since 2019.

Petro starts from an “enviable position, with a large majority in Congress and, in terms of the street, with support that no government had in recent years,” analyst Jorge Restrepo of the Resource Center for Conflict Analysis told newsmen.

Petro’s presidency is historic in another sense, too: by his side will be the country’s first-ever Afro-Colombian woman vice-president, environmental and women’s rights activist Francia Marquez, 40.

The pair will grapple with an economy reeling from the coronavirus pandemic, a spike in violence and deep-rooted anger at the political establishment that culminated in last year’s protests.

Almost 40 percent of Colombia’s 50 million people live in poverty, while 11.7 per cent are unemployed.

On Monday, a preparatory commission set up by Petro said he was inheriting “a level of indebtedness and fiscal deficit that is critical.”

Petro, who in his youth was a member of the M-19 urban guerrilla group, has promised to implement outstanding provisions of the 2016 peace agreement that saw the rebel FARC movement lay down arms after nearly six decades of civil conflict.

The former mayor of Bogota has also vowed to pursue negotiations with the National Liberation Army armed group.

Despite the FARC disbanding to become a political party, Colombia has seen a surge in violence as thousands of dissidents battle the liberation army and powerful cartels for control of drug fields, illegal gold mines and lucrative smuggling routes.

According to the Indepaz peace research institute, there are 90 armed groups with some 10,000 members active in Colombia, the world’s largest cocaine producer.

Petro has proposed allowing armed groups to hand themselves over in exchange for some form of amnesty.

He will be inaugurated at 3:00 pm local time (20:00 GMT) in front of a host of international guests.

Colombian presidents serve only one term.

A professor’s cure for Dangote’s headache

Johnson implores Trump not to meddle in UK election