Home OPINION No manifesto without identification 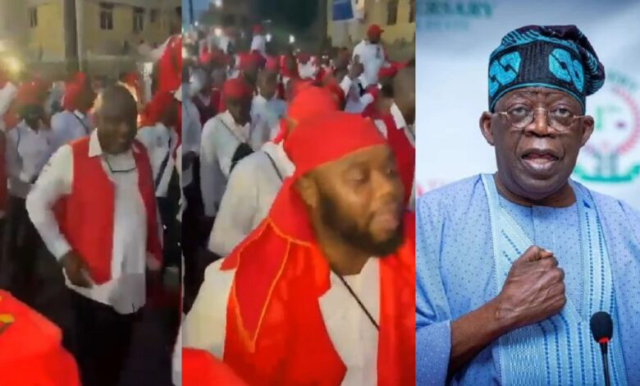 I dedicate this column to the brave Nigerian athletes who last Sunday ended the Commonwealth Games in Birmingham with 32 medals, 12 of them gold.  For a country in which the leadership lacks investment in excellence, what you brought home is infinitely more valuable than the 446 collectively brought home by Australia, England and Canada, the three nations which topped the medals table.

As you competed in Birmingham, you were occasionally seen throwing a few of Buga moves in encouragement or celebration, sometimes in collaboration with other nationals, reminding the world that given a level playing field, Nigerians are a very competitive people.

Back home, as you may have since seen, another kind of dance stormed social media circles in Nigeria.  It is of members of the Pyrates Confraternity singing in a procession of a man whose “hands and feet are shaking, yet he is shouting ‘it is my turn.’”

They were clearly speaking about Asiwaju Bola Tinubu, the presidential candidate of the All Progressives Congress.  There are social media videos showing the APC flag bearer in various stages of tremulousness.  And speaking in Abeokuta, Ogun State, in June, he had said, “It is my time, I’m educated, I’m experienced. I have been serving you for a long time, bring me the presidency, bring it, it is my turn.”

Now, the constitution of the Federal Republic of Nigeria has specifications about who can stand for president and the mechanisms by which a presidential ambition may be prosecuted, but there is no mention of “turns,” let alone “bring me the presidency.”

In other words, anyone making such a claim invites attention to himself, and Tinubu has clearly done that.  It is not out of place, therefore, for him to have attracted that of the Pyrates Confraternity.  When you are as assertive as he has been about wanting the presidency, you must be prepared to substantiate that claim.

But let us be clear: campaigns for the 2023 presidential race in Nigeria have not begun.  Along with campaigns for the National Assembly, they will begin six weeks from now on September 28; as provided by the Electoral Act, marking 150 days before the elections.

In his powerful booklet, “The trouble with Nigeria,” Chinua Achebe writes: “The trouble with Nigeria is simply and squarely a failure of leadership.  There is nothing basically wrong with the Nigerian land or climate or water or air or anything else.  The Nigerian problem is the unwillingness or inability of its leaders to rise to the responsibility, to the challenge of personal example which are the hallmarks of true leadership.”

He offers the example of how, following the seizure of power by Murtala Muhammad in a coup in July 1975, public servants in Lagos were incredibly at work at 7:30 in the morning.  Similarly, the historically bad traffic in the city disappeared.

“Why?” he asks. “The new ruler’s reputation for ruthlessness was sufficient to transform in the course of only one night the style and habit of Nigeria’s unruly capital.”

While not recommending ruthlessness as a political principle, Achebe observes: “That the character of one man could establish that quantum change in a people’s social behaviour was nothing less than miraculous.  But it shows that social miracles can happen.”

Coincidentally, that miracle was repeated in 2015 in the days following Buhari’s assumption of the presidency.  Most cities had electricity.  People reported to work on time.  Poor traffic largely disappeared.   They called it Buhari’s “body language.”

But as it became clear that Buhari’s “body language” was a myth and that the iron spine in his first stint was not his, Nigeria reverted to type and went into deeper decay.

That decay is what we see today: the near-collapse of the economy, the unprecedented corruption, and the top-to-bottom insecurity.  In a leaked audiotape in January 2019, Buhari’s cabinet Minister Rotimi Amaechi summed up Buhari’s early years as an era of deep sadness, saying: “… Everybody is crying, crying…pressmen are crying, farmers are crying, workers are crying, politicians are crying, students are crying, three years oo!”

But if you really want a sense of perspective and just how much the current administration has betrayed the country, I urge you to re-read the APC Manifesto, perhaps the most laughable political document of all time.This is the document on which the party came to power.  In terms of philosophy, it is what best explains APC’s indifference, and how it has lied to Nigerians literally for a living.

Nigerians all have six weeks to study this document in preparation for the electoral campaigns to the presidency and the National Assembly. It is its implementation, or lack of it, that has formed such opinions as the Pyrates Confraternity song for Tinubu, and on which he will hang his attempted “turn” at the buffet.

It is in studying this document that voters, journalists, and activists will be ready for the campaign season, as it will strengthen their understanding of what to ask politicians, particularly in the race for the presidency.

That said, let us address the question of the Pyrates Confraternity video, which will certainly return during the campaigns.  I do not support the mocking of anyone on account of his health and do not believe that the video mocked the APC flag bearer.  What I see is taunting, which is fair political speech, relating to the insistence of the candidate to be given a job that demands health and strength.  There is nothing wrong with taunting a political figure, particularly in their own words.  Taunting a candidate’s presumptuousness is not the same as mocking his frail body, where there is one.

Next, it is ridiculous that Tinubu’s supporters are citing the case of American presidents who had health issues in office.  While those American leaders were officially sick and their ailments were not hidden from the American voter, Tinubu—like Buhari—has never admitted that he is sick. As long as he refuses to admit that he is sick, Nigerians do not owe him the benefit of the doubt.  How can it be your “turn” to seek presidential power if you lack the courage to tell the truth?

In the end, this comes back to Achebe’s words about unwillingness or inability of Nigeria’s leaders to rise… “to the challenge of personal example,” and the question of character which will be the first—not second, not third, not fourth—before the Nigerian electorate next February. Predictably, given Buhari’s awful example, health has become front and centre in that calculus.

Let us remember: when a man seeks a woman’s hand in marriage, he does not show up at his prospective in-laws and begin to lay out promises of how he will make billionaires of all in-laws or make her Queen of Egypt or buy her a country of her own.  First, he clears his throat and identifies himself, beginning with his name and his family, and where and how he has spent his life.  Because it is when people are confident you are whom you say you are that they welcome you. What is clear now is that Nigerians will never again be hoodwinked.  Identify yourself.

P&ID and its Nigerian conspirators