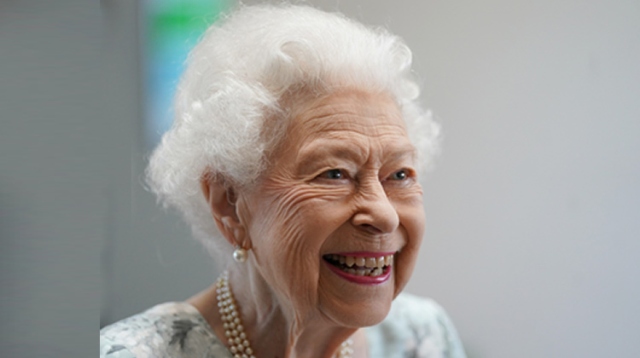 Queen Elizabeth, Britain’s longest-reigning monarch, the nation’s figurehead and a towering presence on the world stage for seven decades, died peacefully at her home in Scotland on Thursday (yesterday) aged 96.

“The death of my beloved Mother, Her Majesty The Queen, is a moment of the greatest sadness for me and all members of my family,” the new king, her eldest son Charles, said.

“I know her loss will be deeply felt throughout the country, the Realms and the Commonwealth, and by countless people around the world,” the 73-year-old said in a statement.

News that the queen’s health was deteriorating emerged shortly after midday on Thursday when her doctors said she was under medical supervision, prompting her family to rush to Balmoral Castle in Scotland to be by her side.

Thousands gathered outside Buckingham Palace, in central London, and there was a stunned silence when the flag was lowered to half-mast. The crowd surged to the gates as the notice announcing the death of the only monarch most Britons have ever known was attached to the black iron gates.

Royal officials said King Charles III and his wife Camilla, the Queen Consort, would remain at Balmoral before returning to London on Friday, when Charles is expected to address the nation and meet Prime Minister Liz Truss. Details of the funeral have not been confirmed.

On Elizabeth’s death, Charles automatically became monarch of the United Kingdom and the head of state of 14 other realms including Australia, Canada and New Zealand.

Huge shock to the nation

The queen, whose husband died last year, had been suffering from what Buckingham Palace had called “episodic mobility problems” since the end of last year, forcing her to withdraw from nearly all her public engagements.

Her last official duty came only on Tuesday, when she appointed Truss prime minister – the 15th of her reign.

“The death of Her Majesty the Queen is a huge shock to the nation and to the world,” Truss said outside her Downing Street office where the flag, like those at royal palaces and government buildings across Britain, were lowered.

“Through thick and thin, Queen Elizabeth II provided us with the stability and the strength that we needed. She was the very spirit of Great Britain – and that spirit will endure,” said Truss, who was informed of the death at 4:30 p.m. London time.

The news stunned not only people in Britain, with condolences pouring in from leaders around the world.

“Her legacy will loom large in the pages of British history, and in the story of our world,” U.S. President Joe Biden said in a statement. He ordered flags at the White House to be flown at half-mast

In Paris, the mayor announced the lights of the Eiffel Tower would be turned off in honour of her passing; in Brazil, the Christ the Redeemer statue was illuminated with the colours of the Union Jack and the government declared three days of mourning; and the United Nations General Assembly and the Security Council both stood for a moment of silence.

Even Russian President Vladimir Putin, whose country’s relations with Britain have plummeted over the war in Ukraine, extended his condolences, calling it an “irreparable loss”.

Queen Elizabeth II, who was also the world’s oldest and longest-serving head of state, came to the throne following the death of her father King George VI on Feb. 6, 1952, when she was just 25.

She was crowned in June the following year. The first televised coronation was a foretaste of a new world in which the lives of the royals were to become increasingly scrutinised by the media.

“I have in sincerity pledged myself to your service, as so many of you are pledged to mine. Throughout all my life and with all my heart I shall strive to be worthy of your trust,” she said in a speech to her subjects on her coronation day.

Despite reputedly only being about 5ft 3ins tall, she commanded any room she entered. Famed for her bright outfits, she is said to have quipped: “I have to be seen to be believed”.

Elizabeth became monarch at a time when Britain still retained much of its old empire. It was emerging from the ravages of World War Two, with food rationing still in force and class and privilege still dominant in society.

Winston Churchill was Britain’s prime minister at the time, Josef Stalin led the Soviet Union and the Korean War was raging.

In the decades that followed, Elizabeth witnessed massive political change and social upheaval at home and abroad. Her own family’s tribulations, most notably the divorce of Charles and his late first wife Diana, were played out in full public glare.

While remaining an enduring symbol of stability and continuity for Britons at a time of relative national economic decline, Elizabeth also tried to adapt the ancient institution of monarchy to the demands of the modern era.

“She has managed to modernise and evolve the monarchy like no other,” her grandson Prince William, who is now heir to the throne, said in a 2012 documentary.

Elizabeth was the 40th monarch in a royal line that followed Norman King William the Conqueror, who claimed the English throne in 1066 after defeating Anglo-Saxon ruler Harold II at the Battle of Hastings.

Her long reign meant she repeatedly broke records for British rulers. When she surpassed the more than 63 years her great-great-grandmother Queen Victoria spent on the throne, she said it was not a landmark to which she had ever aspired.

“Inevitably a long life can pass by many milestones – my own is no exception,” she said.

Her marriage to Prince Philip lasted 73 years, until his death in April 2021, and they had four children, Charles, Anne, Andrew and Edward.

She never gave a media interview and critics said she came across as distant and aloof.

But for the vast majority of her subjects she was a figure who commanded respect and admiration. Her death marks the end of an era.

“When people around the world spoke of ‘the queen’, they actually meant our queen,” former Prime Minister John Major said. “That was the status she had in every part of the world. It was truly remarkable.”

At her death the queen was head of state of not only the United Kingdom but also of Australia, the Bahamas, Belize, Canada, Grenada, Jamaica, New Zealand, Papua New Guinea, Saint Lucia, Saint Kitts and Nevis, Tuvalu, the Solomon Islands, Saint Vincent and the Grenadines, and Antigua and Barbuda.

Opinion polls have suggested that Charles does not enjoy anywhere near the same level of support and there is speculation the loss of Elizabeth may see a rise in republican sentiment, particularly in the other realms.

In some former colonies in the Caribbean, pressure has been rising to remove the monarch as their head of state and for Britain to pay reparations for its involvement in the historical slave trade.

“As the role of the monarchy changes, we expect this can be an opportunity to advance discussions of reparations for our region,” said Niambi Hall-Campbell, a 44-year-old academic who chairs the Bahamas National Reparations Committee.

Asked in a radio interview if the Queen’s death took Australia closer to being a republic, Prime Minister Anthony Albanese said it was not the time to talk about it.

“Today’s a day for one issue and one issue only, which is to pay tribute to Queen Elizabeth II.”

Nigeria spent N2trn on constituency projects in 19 years without results...

INEC and Nigeria’s many political parties

I sold oranges to fund my slain daughter’s law education in...

270 Nigerian evacuees from US arrive tomorrow

BASL honours staff for returning N300, 000, other items to owners