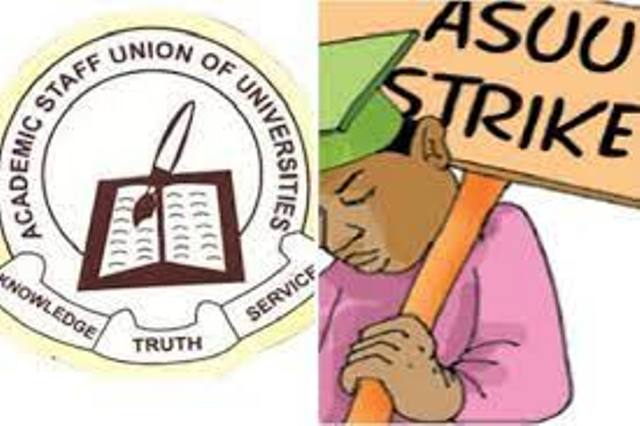 There appears no end in sight to the lingering crisis between the federal government and members of the Academic Staff Union of Universities (ASUU), as the union, yesterday, announced readiness to appeal the order by the National Industrial Court of Nigeria (NICN), directing the suspension of its seven months strike.

According to The Guardian, the national president of the union, Prof Emmanuel Osodeke said efforts are on to appeal the ruling.

The federal government had dragged the university teachers to court, seeking an order mandating lecturers to call off the strike and return to work.

The minister of labour and employment, Chris Ngige, on behalf of the Federal Government, had filed the matter before the NICN by way of referral to resolve the industrial action.

Counsel for the federal government, Mr. James Igwe, urged the court to grant government’s request, while arguing that the seven months already lost to the strike could not be regained.

Citing the provision of section 18 (1) (e) of the Trade Dispute Act 2004, Igwe noted that a worker should not embark on strike when a matter is already before the court, hence, he pleaded that the court should restrain the lecturers from going on with the strike and return to work.

Although ASUU, through its counsel, Femi Falana (SAN), argued that the call for accelerated hearing by the Federal Government was not necessary as there was no urgency in the matter since the strike had lasted for seven months, the court nonetheless agreed with the submission of the government by granting an injunction restraining the lecturers from continuing the strike.

The court, in a ruling by Justice Polycarp Hamman restrained ASUU from continuing with the industrial action pending the determination of the suit.

Justice Hamman ordered that the case file be returned to the president of the Industrial Court for reassignment to another judge because he is a vacation judge.

But Osodeke, while urging members to remain calm, said the union is already filing an appeal against the court ruling.

Similarly, the union in a terse statement by the chairman of Lagos Zone, Adelaja Odukoya, urged members and Nigerians to remain united, even as it suggested that the order would be vacated.

“Our President, Emmanuel Osodeke, has urged members, students and stakeholders to remain calm as there is no cause for alarm on the back to work order by NICN.

“Our lawyer is filing an appeal and stay of execution of the judgment. Members should remain resolute and strong. A people united can never be defeated. Solidarity without compromise,” he said in a statement.

Meanwhile, the leadership of the National Association of Nigerian Students (NANS) and the Education Rights Campaign (ERC) has reacted to the industrial court order.

NANS said it rejected what it called ‘black market’ judgment the Federal Government got against ASUU. According to NANS National Public Relations Officer, Giwa Temitope, the judgment betrayed equity because Government should not have dragged ASUU before the industrial court in the first place.

He said the only solution to the lingering strike is for government to meet the demands of the union, which it willingly entered into with ASUU.

“As an association, NANS is disturbed to read the news of the judgment because we believe that it is not right. Ordinarily, the Federal Government should not have dragged ASUU to court. We want to state categorically that the court cannot force ASUU back to the classroom.

“And, as it stands today, we maintain that the court has not resolved the problem and we reject the ruling in its entirety. The court could have directed the FG to pay rather than directing lecturers to go back to classrooms,” Temitope said.

This was corroborated by the Southwest Coordinator of the body, Emmanuel Olatunji Adegboye, who said: “The fact that they had to drag ASUU to court is a signal that this government cannot handle crisis. And we want to state categorically that the court cannot force members of ASUU back to lecture theatres.”

The national Coordinator of ERC, Hassan Soweto, described the court verdict as unfair and shameful, saying it is a confirmation of his belief that “the judiciary is simply an arm of the apparatus of the capitalist state, just as the police and the army.”

He called on the leadership of the Nigeria Labour Congress (NLC) and Trade Union Congress (TUC) to declare a 48-hour nationwide warning strike in reaction to the court order.

He said; “At this stage, all we can say is that our solidarity with ASUU on its resolve to fight for adequate funding of public universities remains unshaken despite the court order.”

Following the ruling of the NICN, the Congress of University Academics (CONUA) has urged Vice Chancellors of public universities to re-open the institutions for commencement of academic activities.

The group, in a statement by its National Coordinator, Niyi Sunmonu, said this has become imperative, as the court is one of the recognised tools of democratic engagement in the country.

Sunmonu said since CONUA members have not been on strike, re-opening the universities will make it possible to duly continue work, stem restlessness among students who have had their studies interrupted and facilitate restoration of peace to the nation.

REACTING to the judgment, an Abuja-based lawyer, Douglas Ogbankwa, convener of Vanguard for the Independence of the Judiciary, said though he received the court verdict with mixed feelings, the order, being the subsisting one for the time being, must be obeyed by ASUU and then they can take precluding steps to ventilate their position.

“The comments by ASUU that they will not obey the court order amount to contempt of court. As ministers in the temple of justice, our duty as lawyers is to ensure that orders of courts are obeyed.

He said ASUU as a creation of law must work within the ambit of the law, obey the order and if dissatisfied, take legal steps to overturn or discharge the same.

Another lawyer, Godwin Ogboji, said since the industrial court that gave the judgment is the court of first instance, ASUU can legally appeal the judgment and apply for an injunction pending appeal or stay of execution.

“The consequence of any of these applications is that the strike will continue pending the determination of their appeal, which can be further taken to the Supreme Court.”

He, however, urged ASUU to consider the interest of students who have been forced to stay at home for close to eight months now because of the refusal of government to do the needful.

A lawyer, Akamihe Ephraims said while ASUU is bound by law to obey the court order, “you can force a horse to the river but you can’t force it to drink. Assuming public universities are immediately re-opened, I doubt if the order can make ASUU lecturers who have not been paid their salaries for seven months running to start delivering lectures to students immediately.

“Even if by providence they find themselves in the classrooms, I doubt if they’ll be able to impart knowledge if these issues are not immediately resolved.

“The government appears content that public universities are shut down so long as it does not affect them and their children. I think they only started taking them serious when students joined the strike last week and started blocking highways and threatened to picket airports, which affects their movement.”

An Ibadan-based labour activist and human rights lawyer, Mr. Femi Aborisade, described the judgment as a miscarriage of justice. He said the strike involves a challenge to unimplemented series of collective agreements since 1992. Under section 254C (1) (J) (i) of the Constitution, collective agreements are enforceable.

“The federal government should be honourable and do the needful by implementing agreements willingly entered into since 1992. That is the way to resolve the dispute meaningfully. Court orders directing lecturers to resume cannot resolve the dispute. It can only suppress one of the parties.”

Ambode’s impeachment not on the cards now—Speaker LSHA

Why married men are becoming hot cake for single ladies