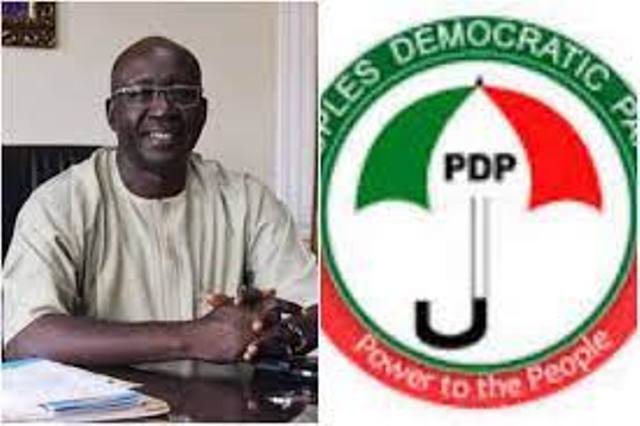 The South-West Forum of PDP Stakeholders for Justice says Dr Iyorchia Ayu, the party’s National Chairman will become a hero if he voluntarily resigns in the interest of peace and electoral victory for the party.

Recall that the PDP was hit by crisis after Mr. Atiku Abubakar emerged the party’s Presidential Candidate for the 2023 general elections.

Some PDP governors and leaders, particularly from southern Nigeria were insistent that for fairness, northern Nigeria should not hold both the party’s presidential ticket and national chairmanship position.

Leading in the struggle for resignation of Ayu, who is from the north central is the governor of Rivers State, Mr. Nyesom Wike and other leaders of the party from southern Nigeria.

Also, the governor of Oyo State, Mr. Seyi Makinde and some southwest PDP leaders on September 17, called for Ayu’s resignation at the zone’s stakeholders’ meeting with Abubakar.

In a statement jointly signed by the coordinators of the forum, Messrs Banji Okunomo and Gani Taofik in Lagos on Thursday, the group threw its weight behind the calls for the resignation of the party chairman.

According to it, the resignation of the chairman is the only panacea for peace in the party.

“We, the above-named forum of the PDP, wishes to affirm our support for the position being canvassed by Makinde, corroborated by the doggedness of the ‘Wikes’ and the wisdom of the ‘Bode Georges’, as a lasting panacea for peace and eventual victory of our party at the 2023 presidential election,” the group said.

The forum said that Ayu should be able to sacrifice for Atiku to win the next election.

“It is our take, that Ayu should indeed go further to logically and wisely conclude the process that will guarantee the emergence of Abubakar as the next president of Nigeria, by making other possible sacrifices necessary to achieve that goal.

“Indeed, this is why and when Ayu himself will be more celebrated as PDP’s hero of democracy rather than clogging the party’s wheel of progress and creating avoidable crisis for the party,” the group said.

It urged Abubakar to be wary of the ill and reactionary advice of some moles in the party.

It said that the moles were insistent on offering opinions capable of jeopardising the chance that God had opened for the PDP in the emerging dispensation.

“Nigerians are indeed awaiting the PDP as the actual potent alternative government, and God forbids, if this opportunity skips us, Nigerians may never again associate with the PDP.

“We call for immediate restoration of sanity, confidence, inclusiveness and oneness in the Party as a stitch in time saves nine,” it said.

The crisis got deeper on Wednesday (yesterday), when loyalists to Wike’s caucus pulled out of the Atiku presidential campaign council after a meeting in Port Harcourt, Rivers.

The group said they would not participate in Atiku’s campaign activities unless the party’s national chairman vacated his seat for a southerner to allow ‘balance’ in the party.

The reign of Abba Kyari