Home Politics Wike, Ortom, Makinde, others fight on as PDP flags off campaign 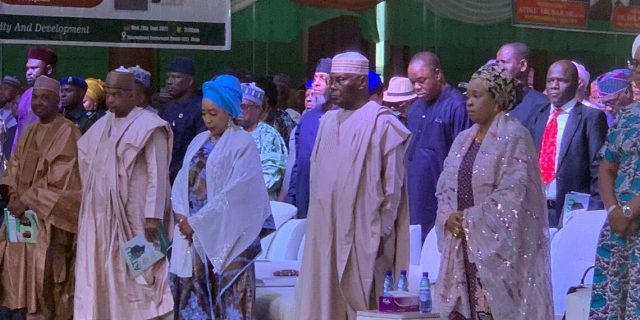 The Peoples Democratic Party (PDP), yesterday, kicked off its electioneering for the 2023 elections with the inauguration of a 520-member presidential campaign council at the International Conference Centre, Abuja.

However, the inauguration was shunned by some sitting governors of the party including Samuel Ortom of Benue State; Seyi Makinde of Oyo State; Ifeanyi Ugwuanyi of Enugu State; and Okezie Ikpeazu of Abia State.

They are allies of the governor of Rivers State, Mr. Governor Nyesom Wike, who has insisted on the resignation of the national chairman of the party, Dr Iyorchia Ayu as condition for joining the working presidential campaign council.

Also absent was Ayu who was reported to have been ill. He was represented by the deputy national chairman, Mr. Iliya Damagum.

Speaking during the inauguration, Atiku said the PDP has the task “to rescue and rebuild our beloved country, Nigeria.”

To execute the task, Atiku said the PDP “must first takeover the mantle of leadership from the party that has driven us into this mess.”

“What is our task that we are gathered here today to undertake? It is beyond merely coming together to inaugurate Presidential Campaign Council. No!

“Our task today is to come together to rescue and rebuild our beloved country, Nigeria.  That is the end goal. It is existential to us as a nation, and it is a task that history beckons upon us all to grasp with both hands and undertake with vigour and zeal.

“But, to rescue and rebuild our country, we must first takeover the mantle of leadership from the party that has driven us into this mess.  To do this, we must all be united in purpose and come together to fight and win all the elections slated for next year.

“Every single person, who loves this country, as I do, is needed for the arduous tasks that face us ahead as a nation, and this includes every member of the PDP. And it is my fervent hope and prayer that every man and woman of goodwill will join hands with us to help rescue, rebuild and reposition our beloved country, Nigeria,” he said.

However, the former vice president said the tasks ahead may appear daunting and seem a load too heavy to bear “but for the sake of our country, for the sake of our children, and for the sake of generations yet unborn, we must not, even for one minute, shirk in the responsibilities that we have been entrusted with to come together to rebuild this beloved country of ours.”

He congratulated those selected “form among millions of our party members to join this esteemed council” but noted that “naturally, not all members of our party can be in the presidential campaign council.”

“But every single member of the PDP is an important member of the party and each one of you is still entrusted with the responsibility of leading our party to victory in next year’s elections.

“Those of you, who have not found yourselves in the presidential campaign council, are just as important as those who have, and we do not take your contributions for granted,” he added.

For his part, Ayu, represented by Damagum, charged members of the campaign council to put in their best in the discharge of the assignment of righting the wrongs of the ruling All Progressives Congress (APC) at the polls.

“We can no longer stay by the side without blowing our white list. We have gone through a transparent primary. We know that PDP is more focused than ever.

“To you members of the campaign council, you were all selected because you have distinguished yourselves in your various capacities. Atiku has been tested.

“Nigerians have no doubt of his capacity to run the country. We have to rescue this country from the clutch of APC. God has provided Nigerians another opportunity to evaluate us and those that came after us. It is time to do the needful,” he said.

For his part, Okowa said the PDP would win “f elections were conducted today,” adding that the party always presents to Nigerians the best presidential candidates, especially, at times when country is in dire need of leadership.

“PDP gave Nigeria the best at a time the country is sick. We cannot try those, who are not yet experienced enough to heal the country or build bridges. There is no need for the on-job-trainees. We need competent and tried consultant.

“We must be proud as a party to present the best man for the job. We must ensure that this campaign is taken very seriously to our various wards and local governments across the country. I am very convinced that the PDP will win the South-east. We have been to the South-west, and what I saw there was impressive. The same in the north.

“PDP is the only party that is contesting very well in the six geo-political zones in the coming election. If elections were conducted today, the PDP will win,” he added.

In his speech, Emmanuel who is the chairman of the campaign council charged the team to work hard and diligently to ensure victory for the party at the 2023 general elections.

He said their membership of the council was borne out of the trust the party has in them to perform and win at the polls.

He also urged all the aggrieved members of the party to sheath their swords and unite to build the PDP for the good of all.

“I want to assure you that as a campaign council, we have the seriousness, unity that is required. It is our duty to campaign, to carry and publicise the message on how to rescue and restore the hope of Nigerians. It is for Nigerians to vote and for the Almighty to give victory.

“The rock remains as solid as ever. Please, don’t mind the doomsayers. We want to assure you that we are campaigning to win. Nothing is acceptable to PDP outside victory for PDP, but this will also require that all of us must work.

“This time, there is no sitting in Abuja; everybody will have to work hard and carry the message home. PDP is not an Abuja party; you win from your unit, your ward and not by sitting in Abuja. The campaign council will take the message to the unit,” he said.

Also speaking, the director general of the council, Tambuwal, enjoined INEC to be fair and unbiased in the management of the 2023 elections

“It is with humility and sense of purpose that I stand before you as the DG campaign, which will serve as the vehicle that will deliver the PDP and its presidential flag bearer and his running mate to the Villa, come May 29, 2023 by the Grace of God.

“The PDP and our candidate is the party to beat in this election, it is only for us to work and with God on our side, we shall deliver this victory to our party and to Nigerians. We have the support of Nigerians and we appeal that INEC will conduct a free and fair election, and victory by the Grace of God, will be guaranteed for PDP,” he added.

Eighth national assembly winds down, passes over 300 bills in 4 years

Fayemi takes over from Fayose

This is not the change we fought for–Saraki