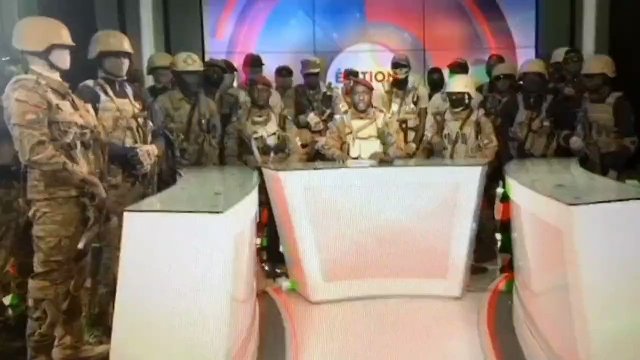 Traore said in a statement read on national television on Friday evening that a group of officers, who helped Damiba to seize power in January, had decided to remove their leader due to his inability to deal with worsening Islamist insurgency.

Reuters reported that Damiba had ousted former President Roch Kabore in January, in part for the same reason.

Consequently, the constitution has been suspended and the transitional charter dissolved, borders are closed indefinitely and all political and civil society activities are suspended, Traore said. He also declared a curfew from 9pm to 5am.

“Faced with the deteriorating situation, we tried several times to get Damiba to refocus the transition on the security question,” said the statement signed by Traore and read out by another officer on television, flanked by a group of soldiers in military fatigues and heavy armour.

The statement said Damiba had rejected proposals by the officers to reorganise the army and instead continued with the military structure that had led to the fall of the previous regime.

“Damiba’s actions gradually convinced us that his ambitions were diverting away from what we set out to do. We decided this day to remove Damiba,” it said.

He said national stakeholders would be invited soon to adopt a new transitional charter and designate a new civilian or military president.

“The chairperson calls upon the military to immediately and totally refrain from any acts of violence or threats to the civilian population, civil liberties, human rights,” the AU said in a statement, calling for the restoration of the constitutional order by July 2024.

AU chief Moussa Faki Mahamat said he was deeply concerned about the resurgence of unconstitutional ousters in the West African nation and elsewhere on the continent.

Shops slowly started reopening in the dusty and spread-out city, where pre-dawn gunfire on Friday around the presidential palace culminated in the latest coup, that drew wide condemnation.

The Economic Community of West African States regional bloc “condemned in the strongest possible terms” the latest seizure of power, calling it “inappropriate” at a time when progress was being made for a return to constitutional order by July 1, 2024.

Burkina Faso’s former colonial ruler France told its citizens in Ouagadougou, believed to number between 4,000 and 5,000, to stay home, while the European Union expressed “concern” at the unfolding events.

The United States called “for a return to calm and restraint by all actors”.

Just before 8:00 pm (2000 GMT) on Friday, more than a dozen soldiers in fatigues appeared on the state television and radio broadcaster to announce the removal of Lieutenant-Colonel Paul-Henri Sandaogo Damiba.

“We have decided to take our responsibilities, driven by a single ideal: the restoration of security and integrity of our territory,” they said.

“Damiba failed. Since he came to power, the zones that were peaceful were attacked. He took power but then he betrayed us,” Habibata Rouamba, a trader and activist said on Saturday.

With much of the Sahel region battling a growing Islamist insurgency, the violence has prompted a series of coups in Mali, Guinea and Chad since 2020.

In January, Damiba installed himself as leader of the country of 16 million after accusing elected president Roch Marc Christian Kabore of failing to beat back the jihadists.

But with more than 40 percent of the country outside government control, the latest putsch leaders said Damiba, too, had failed.

“Far from liberating the occupied territories, the once-peaceful areas have come under terrorist control,” the new military leaders said.

They then suspended the constitution, sealed the borders, dissolved the transitional government and legislative assembly and instituted a 9:00 pm to 5:00 am curfew.

In the morning, shots rang out in the Ouaga 2000 neighbourhood, which houses both the presidential and junta headquarters.

State television was cut for several hours prior to the military announcement, broadcasting just a blank screen with the message “no video signal”.

Though Damiba had promised to make security his priority when he took charge on January 24, violent attacks have increased since March.

In the north and east, towns have been blockaded by insurgents who have blown up bridges and attacked supply convoys.

As in bordering countries, insurgents affiliated with Al-Qaeda and the Islamic State group have stoked unrest.

Of AFCON, omicron and the end of COVID