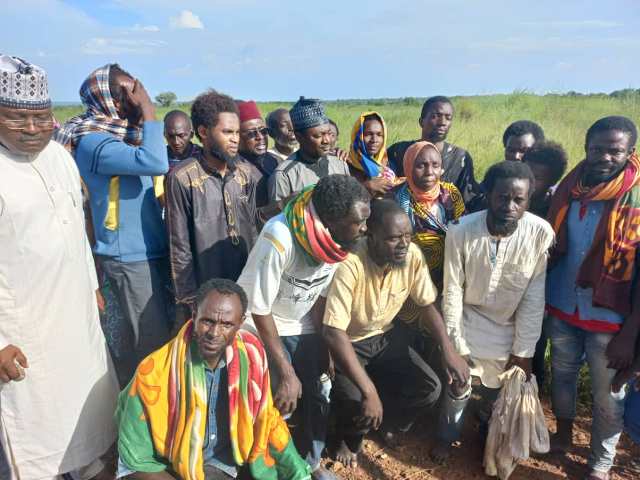 Boko Haram terrorists who attacked an Abuja-Kaduna passenger train on March 28 and abducted over 60 travellers yesterday released the remaining 23 hostages after 191 days.

The chief of defence staff, Maj. Gen. Lucky Irabor, who announced the release of the abductees in a statement issued yesterday in Abuja, did not give details how the hostages were set free.

According to the release signed by the secretary, chief of defence staff action committee, Prof. Usman Yusuf, reads: “I am pleased to announce to the nation and the world that at 1600Hrs (4:00pm) today, Wednesday, 5-10-2022, the seven-man Presidential Committee assembled by the Chief of Defence Staff (CDS), General L.E.O. Irabor, secured the release and took custody of all the 23 remaining passengers held hostage by Boko Haram terrorists following the attack on the Abuja to Kaduna train on 28-3-2022.

“The nation owes a debt of gratitude to the Nigerian military under the leadership of the CDS, who conceived and guided the operation from start to finish.

“All sister security agencies and the Federal Ministry of Transportation contributed immensely to this operation.

“The unwavering support of the President and Commander-in-Chief of the Nigerian Armed Forces, President Muhammadu Buhari is what made it all possible.

“Members of this committee are grateful for the rare honour and privilege to be part of this humanitarian operation.

“May God Almighty heal our wounds and bring peace to our land.”

Reacting to the development, the president said in a statement by his media aide, Mr. Garba Shehu that “this country’s armed forces are as good as any.”

He said all they (armed forces) need is the support to do exploit and urged them to sustain the relief that comes from the closure of train abduction saga all over the country.

The president said Nigeria owed the military and all other security and intelligence agencies a debt of gratitude for the successful conduct of the operation leading to the release of the hostages.

He said the agencies had shown outstanding capabilities over this period that the world will not fail to take note of.

“This country’s Armed Forces are as good as any. Given needed support and encouragement as we have been doing, there is no task that they cannot accomplish. I commend them for this remarkable outcome.”

In expressing satisfaction with the successful deployment of both kinetic and non-kinetic processes leading to the eventual safe release of the remaining hostages, Buhari also congratulated the families of the victims for having them back alive.

The president also credited his government for resolving the train incident and for reduction in terrorism, banditry, and kidnapping, which had surged recently. He assured that the efforts would be sustained.

Similarly, the Christian Association of Nigeria, CAN, saluted the Nigerian military for rescuing all the remaining 23 kidnapped train passengers from captivity.

The vice chairman of CAN, Rev. Joseph Hayab, prayed the military to sustain the tempo and ensure that all other kidnapped victims in the country are rescued and returned to their families.

Vanguard quoted Hayab as saying that Azurfa, the lady that one of the terrorist leaders had threatened to marry in the forest, was on her way home (yesterday) as her brother had confirmed that she was released.

Dana Air in partnership with The ELOY Foundation to empower women