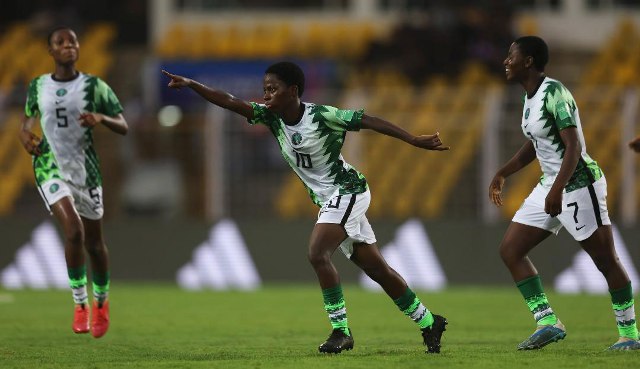 Nigeria’s Flamingos bounced back into contention at the FIFA U17 Women’s World Cup on Friday after a 4-0 trouncing of New Zealand in Goa. The score line would have been much higher had the girls from Nigeria converted more of their scoring opportunities.

The Flamingos, who lost narrowly 2-1 to Germany on Tuesday, started spritely and had come close a number of times before Aminat Omowunmi Bello headed into the net after a sweet pull-out by left-back Tumininu Adeshina.

Right-back Miracle Usani, whose marvelous free-kick put Germany on the back-foot on Tuesday, scored her second of the tournament and Nigeria’s second in the 34th minute to make it 2-0 in favour of Africa’s best team at the interval.

Ajakaye, the team’s top scorer in the African qualifying campaign, headed powerfully from Adeshina’s corner on the hour mark, but the New Zealand goalkeeper punched the ball away.

Why I stopped going for trial – Dasuki

Consider freedom for Leah Sharibu, others – CAN tells FG

Meghan Markle traces 43% of her root to Nigeria