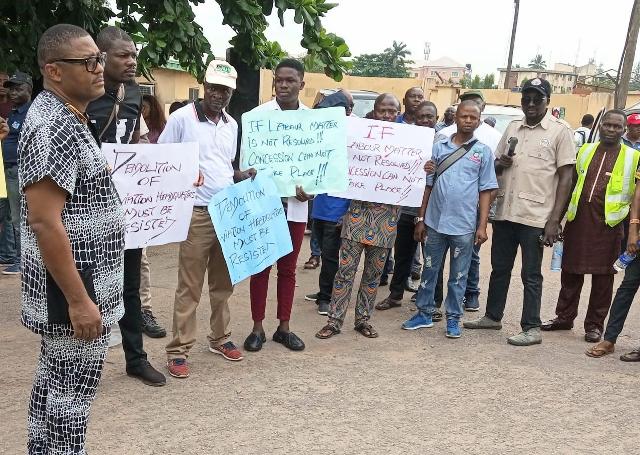 Unions in the aviation industry staged a peaceful protest in Lagos yesterday against the various concession programmes of the minister of aviation, Mr. Hadi Sirika, saying they are in the main driven by selfish interest.

They displayed placards with various inscriptions such as ‘MMA2 is an example of bad concession,’ Demolition of aviation headquarters must be resisted’, ‘Government give us our entitlement and take your airport’, ‘If labour matter is not resolved concession cannot take place’, ‘More than 50 legal cases on various aspects of operations of the airports are currently in court’.

He said the unions are shocked that the minister had suddenly woken up to deliver the projects in the twilight of his tenure, less than seven months before his exit.

He also said the unions were alarmed by plan by the minister to demolish the headquarters and staff quarters of FAAN annex, Nigerian Civil Aviation Authority (NCAA) and Nigerian Airspace Management Agency (NAMA) in Lagos for the phantom aerotropolis project.

“We consider that this plan, in the name of the so called aerotropolis, is ill intended, ill-advised, and wrongly timed.

“For inexplicable reasons none of the projects has been delivered up till now. It is therefore not surprising that the Hon. Minister is presently in a frenzy in an effort to deliver these projects, being that this administration is at its twilight.

“This rush to deliver at all cost has expectedly occasioned suspicion and a plethora of missteps which if not corrected will spell doom for the aviation industry in Nigeria, and which may proof exceedingly costly to amend in future,” Aba said.

Continuing, he said: “Our hearts are now greatly troubled to be witnesses to the ongoing bastardization of the lofty objectives of the aviation road map.

“Ordinarily, the attainment of the flagship projects ought to act as consummation of the benefits of the substantial investments made by government in facilities upgrade in the agencies.

“But, activities around the implementation of the road map tend to suggest that a ploy is afoot to deny Nigeria of the benefits of its labour and natural endowments, or to divert such to private ends.

“Nothing evidences this more than the fact that key decisions and actions around the projects are taken outside the statutory organs of the Infrastructure Concession Regulatory Commission (ICRC); the project delivery team in which our unions are represented for example. Such important questionable actions include appointment of transaction advisers and approval of business cases for all the projects,” he said

Aba further said that since the decision to concession the four international gateways, “our unions have been strongly opposed to the idea.”

He said when the Outline Business case was made open to the public the unions “have been firm and vehement in our opposition to the type of concessioning envisioned by the transaction adviser, for good reason.”

He said the unions were able to unearth several booby traps, outright falsehoods and deliberate manipulation of facts to skew the transaction toward the interest of Nigeria.

Some of the loopholes, according to Aba, include 1) extending the scope of the concession to the surroundings of the terminals, up to FAAN housing estates without taking such into account in the assets valuation; 2) arbitrary fixing of profit sharing ratio (60:40) in favour of the concessionaire; 3) playing the ostrich in connection with existing concessions and plethora of live litigations over the airports to be concessioned; 4) being dangerously silent on labour issues; 5) transgression against the ICRC Act as the concession is being undertaken by the ministry of aviation, and not by FAAN which negates the Act; 6) overlooking the wiser choice of going for management contract option instead of concession, considering that the airports in question are all brand new; and 7) overlooking the very serious implication of handing such important national security assets over to foreigners.

Aba therefore called on the federal executive council to halt further approvals on the airports concession programme, and indeed any other aviation road map project, pending a comprehensive forensic audit of the projects undertaken up to this point.

“It is our firm belief that such audit will expose the activities so far to be wasteful of public funds, and to be tilted away from national good. This is the least the Council can do in order to redeem itself, in the face of the accusation that the federal executive council has so far been railroaded into giving consent to bad deals for the country.

Besides, he called on FAAN staff and pensioners, and indeed the entire aviation workers, to stand ready for the fight of our lives in defense of our genuine rights and interests, and to save our industry from ruination.

The unionist also advised all firms interested in partaking in the opportunities inherent in the aviation road map to tarry a while and not commit their funds to the current arrangements in respect of the road map projects.

“Any firm that chooses to neglect this advice does so at their own peril, for our Unions will do everything rightly possible to ensure that all such unwholesome efforts do not bear fruit until the right things are done. Particular reference must be made to the airport concession bidders and those related to Nigeria Air,” he added.

On the demolition of FAAN, NAMA, and NCAA offices in Lagos for the proposed aerotropolis project, Aba said “any attempt to demolish any of these buildings at this time will be met with immediate action of cessation of work at all airports in Nigeria accompanied by public demonstrations nationwide.”