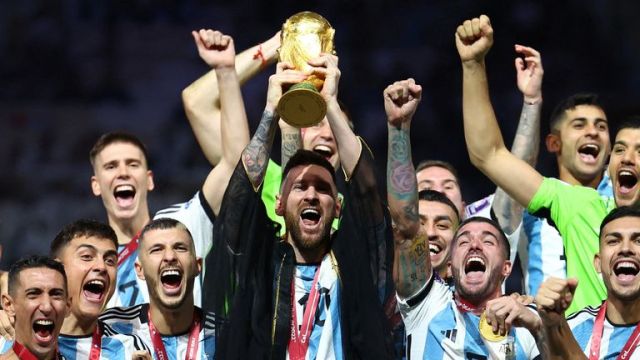 The world’s most beautiful game, football, seized the attention of all lovers of the game for one month without distinct distractions.

As it ended on Sunday with a bang, we wish it never ended but it will come again within the next four years. Three countries, United States, Canada and Mexico will co-host 48 nations in what will be the biggest football gathering on earth.

Last Sunday’s closing ceremony was brief and beautiful with our own David Adeleke aka Davido performing in a world class act that captured the psyche of the world. The closing ceremony epitomised the fusion of culture, technology, globalisation and razzmatazz. We wished it never ended but it will come again, in 2026.

And the epic football match between two giant football nations who had won the world cup twice each before last Sunday’s encounter was something to remember for a long time. The two giants, Argentina and France seemed evenly matched until Argentina stole the show in the first half by putting two goals behind the French net. When the second half resumed, France recovered quickly and also dropped two quick goals behind the Argentina net.

At two goals to two the game became a ding-dong affair with twists and turns, with rising tempers and falling hopes. Twice the French had fallen behind and twice they came back, giving us the impression that they were not quitters, that they were ready to give the game what it needed, their all. To shorten the story, the game ended in penalties and Lionel Messi, the Hercules of Argentina rose to the occasion and showed the gift of his fabulous captaincy, inspiring his teammates to a well-deserved victory.

By the end of that game, Messi had a gold medal dangling on his neck, his first and presumably last gold medal he would get from the senior World Cup since age at 39 then is likely to make him only a spectator of the 2026 world cup. But it must be put on record that Messi, just like Maradona before him, had used his left foot to do what was right for himself, Argentina and football. We hail him.

But not to be forgotten is the explosive pace of the French forward Kylian Mbappe who is originally from Cameroun. He never missed any of the penalties he took but was amazingly humble about his feat.

I saw torrid tears dropping from his eyes but no matter how hard you try, you cannot truly console a man who felt that the trophy was just a few inches away from grabbing distance. The French players may have also felt bad that apart from missing the trophy, they had failed to enrol their team among the two greats, Italy and Brazil that had won the trophy back to back. Italy grabbed the trophy in 1934 and 1938 while Brazil achieved the feat in 1958 and 1962.

With this win, Argentina is now a three-time winner of the trophy (1978, 1986, 2022). But they are still one win away from Italy and Germany who have won the diadem four times each. No team has yet reached the record of football’s greatest nation Brazil, which has won the trophy five times, with the indomitable Pele doing so three times.

Africans have been celebrating Morocco’s excellent run when no one gave them a chance to go beyond the group stage. For it to get to the semi final was a historic record as no African team has ever gone that far in the World Cup. But the Morocco performance did not occur by happenstance. The Moroccan government has reportedly been investing massively in the development of football infrastructure, grassroots grooming of future footballers and the welfare of footballers in the country. But it is obvious that there is a gradual narrowing of the gap between football super powers and countries that were largely regarded as minions in the matter.

Why did Saudi Arabia beat Argentina? And why did Cameroun beat Brazil? These were no accidents. No accident can come from 90 minutes of action. The only explanation is that the gap is getting closer and in the next few years as these minions invest more in this global game, the surprises will surge.

The game got a lift in Qatar with the excellent pitches provided. All the pitches were lush green, tempting anyone to lie down and sleep peacefully when they were actually created for the execution of brutal battles. Qatar invested about $220 billion in organising Qatar 2022, providing, can you believe, airconditioning in the pitches to reduce the searing heat in that desert country. The world cup is customarily held in June/July but the heat in Qatar is extremely devastating at that time. That necessitated the shifting of the World Cup period to November/December, which is less horrendous than the June/July period.

More interestingly, it should be noted that Qatar, a small oil-rich country of less than three million people decided to offer to the world the best facilities that technology and money can provide. Three of its stadiums had a capacity of 40, 000 each, one stadium could take 44, 740, two others could handle 45, 350 and 45, 416 spectators each while another had capacity for 60, 000 people. The one that takes the prize is the Lusail Iconic stadium, which can accommodate 80, 000 spectators.

The biggest stadium in Nigeria is the M.K.O Abiola stadium in Abuja, which can only handle 60,000 spectators. All the other stadiums in the country have far lower capacity. Nigeria cannot therefore dream of hosting the World Cup at the senior level. The competition for hosting the World Cup is fierce because it is the biggest football event in the world. To earn the right to host the 2022 event, Qatar defeated United States, South Korea, Japan and Australia.

By building large capacity stadiums Qatar was thinking ahead. It was building them for the future. In Nigeria we do things differently. Two examples will suffice. When we were building Abuja we never thought it would grow to become a major city of significance. The road from the city to the airport is a two-lane road, which we have been struggling to expand for the past few years. This expansion involves the destruction of built-up facilities. If we had thought right nothing would have stopped us from building a six-lane road.

We have the same problem with the Lagos-Ibadan expressway, a major north-south economic artery. We constructed two lanes. Now traffic chokes the road and we are struggling to expand it at great cost. We have to destroy built-up facilities and pay compensation. If we thought that soccer is a global sport to which our people are addicted we would have thought of providing bigger and better facilities for the game.

Now China is working on a 50-year plan for football. That is a country that recognises that football is worth investing in because it is a national and global unifying force. Nigeria knows it to be a unifying force but it does not invest sensibly in its development. It does not expand its infrastructure. It does not develop the capacity of its local coaches; it merely hires third class foreign coaches whose salaries are not even paid when due.

When it comes to competition time we hope to win. If we don’t win, we cry. Why should we cry when we do not plan to win? Winning is a destination. We must be ready for the journey in order to get there safely. Winning does not happen by happenstance. It happens by deliberate planning and dedicated execution of our plans.

Morocco did well in the tournament through deliberate planning. Qatar hosted the tournament successfully through deliberate planning. No one can win without proper planning and wise investment. Our football administration lacks both. When we go into any competition we pray for goodluck. We ask Nigerians to pray for their success. Prayers without planning, without investment, without dedication is an act in futility.

I said on this page a few weeks ago that if we intend to feature in the 2026 World Cup now is the time to start planning for and investing in it. We need to drop the fire brigade approach to football administration. We need to worry less about what monies we can chop from football. We need to worry more about what gift we can give to football administration in order for us to achieve the kind of success that we keep dreaming about. That is it. Will we do it? Let’s wait and see if those who are involved in our football at all levels will score.

NiMet gets research grant from the United Kingdom

No national identification number, no registration for 2020 UTME – JAMB

N15m ransom paid, one bandit swapped for release of 27 Afaka...

Ugwuanyi: Tearing down walls of exclusion at 57